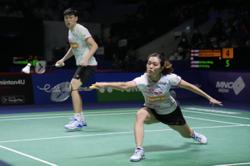 National singles player Ng Tze Yong in action against India's Lakshya Sen in the badminton final during the Birmingham Commonwealth Games at the National Exhibition Center on Monday. - Bernama

PETALING JAYA: Men's singles Ng Tze Yong's giantkilling run in the Commonwealth Games came to an end when the Malaysian shuttler was beaten in three games by Lakshya Sen of India on Monday (August 8).

Having beaten world champion Loh Kean Yew of Singapore and world championships runner-up K. Srikanth of India, en route to the final, Tze Yong had started positively in the opening game at the National Exhibition Centre in Birmingham.

However, the more experienced Lakshya came back strongly after losing the first game to make make it a double for India in the singles.

Elsewhere, Malaysia secured a bronze medal at the University of Birmingham Hockey and Squash Centre where Rachel Arnold-Aifa Azman clinched bronze in the women's doubles squash.