National singles player Ng Tze Yong in action against India's K. Srikanth in the badminton semi-finals at the NEC Hall on Sunday. - Bernama

PETALING JAYA: A confident Ng Tze Yong is assured of a medal in the men's singles event after stunning world No. 13 K. Srikanth yet again in the Commonwealth Games.

World No. 42 Tze Yong proved that his victory over the 2021 World Championship silver medallist Srikanth in the mixed team final was no fluke when he came from behind to beat the Indian 13-21, 21-19, 21-10 in a thrilling semi-finals at the National Exhibition Centre on Sunday (Aug 7).

The youngster showed great mental fortitude and fighting spirit to edge Srikanth in the second game after losing the first without much fight.

In the third game, he proved too good for Srikanth and romped home for the win.

Tze Yong who had toppled Singapore's reigning world champion Loh Kean Yew in the quarter-finals, will face another Indian, world No. 10 Lakshya Sen in the gold-medal match on Monday (Aug 8) at 4.40pm Malaysian time.

Pearly Tan-M. Thinaah made it a double joy for Malaysia when they lived up to their top seeding to reach the women's doubles final after defeating Treesa Jolly-Gayathri Gopichand of India 21-13, 21-16. They will face Chloe Birch-Lauren Smith of England next.

Hopes were high on Aaron Chia-Soh Wooi Yik and Chan Peng Soon-Tan Kian Meng to make it an-all Malaysian final in the men's doubles but they went down in a whimper.

Aaron-Wooi Yik's winning streak against Ben Lane-Sean Vendy of England finally ended when they lost 21-18, 17-21, 4-21 while Peng Soon-Kian Meng found India's Satwiksairaj Rankireddy-Chirag Shetty too hot to handle as they went down 6-21, 15-21.

Both Malaysian pairs will take on each other in the bronze-medal playoff.

Earlier, Kian Meng-Lai Pei Jing fell 23-25, 18-21 to Terry Hee-Jessica Tan of Singapore in the mixed doubles semi-finals and will take on Adam Hall-Julia Macpherson of Scotland in the bronze-medal playoff. 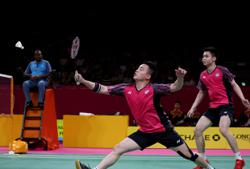