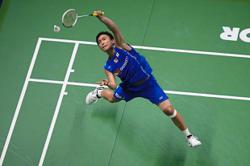 GRADUATING from the school of hard knocks has made Chou Tien-chen (pic) realise that he fears no one in the current generation of shuttlers.

The Taiwanese 32-year-old was on the receiving end of Lee Chong Wei and China’s Lin Dan on a regular basis in the early stages of his career but it had helped shape the veteran’s strong character.

While Chong Wei retired in 2019 followed by Lin Dan the following year, Tien-chen continued to challenge the likes of current top stars like Viktor Axelsen of Denmark, Malaysia’s Lee Zii Jia, Kento Momota of Japan and other leading players from India and Indonesia.

The player who calls God his coach as he doesn’t have a full-time trainer, wants to win the Olympic Games gold in Paris 2024 and continue playing until he is 40.

“The top players in my generation like Lin Dan and Chong Wei were so skilful and physically strong. Playing them so many times increased my confidence and built my character. If I could play against Chong Wei and Lin Dan, I can face anyone,” said world No. 4 Tien-chen.

“Of course, players like Viktor and Momota represent the new generation who rely on their speed and power but I’m not too worried. I believe that I can beat them.

“God is my coach and my guiding light and with his blessings, I have been able to do well.

“My main objective is to win the Paris 2024 gold and, God willing, I want to play until I’m 40. It is possible as long as I watch my diet, get proper rest, understand my body and train accordingly.”

Tien-chen’s late flourish started at 28 when he won the German, Singapore and Korean Opens besides finishing runner-up at the Denmark and China Opens. A similar success in 2019 followed as he won the Indonesian, Thailand and Taiwan Opens and reached the finals of Korean and China Opens.

He finished runner-up behind Axelsen in the 2020 All-England before Covid-19 slowed down his progress but Tien-chen is biding his time and believes he can continue doing well as long as he can compete with the much younger players.

“I may be 32 but I’m young at heart and appreciate the good health God has given me.”

The confident but humble Tien-chen did well to reach the final of the Indonesia Masters in Jakarta three weeks ago where he lost to Axelsen.

He also had a positive start in the ongoing Malaysian Open where he beat Brian Yang of Canada 21-16, 21-9 in the first round on Tuesday.

Tien-chen plays H.S. Prannoy of India in the second round today as the maverick shuttler tries breaking new boundaries in his career.