Game for new approach: Aaron Chia (left) and Soh Wooi Yik in action at the recent Indonesia Open where they lost at the semi-final stage. — AP

PETALING JAYA: It will be mind over the matter for Aaron Chia as he intends to overcome the semi-final jitters and finally win a world tour title with Soh Wooi Yik.

National doubles coaching director Rexy Mainaky has repeatedly advised Aaron to remove his fear of failure that starts at the semi-final stage and just treat it like how he will perform in the earlier rounds of a tournament.

Despite winning the men’s doubles bronze at the Tokyo Olympics last year, Aaron-Wooi Yik have yet to win a BWF (Badminton World Federation) World Tour title.

Aaron-Wooi Yik’s best achievement this year was reaching the final of the Asian Championships in Manila in April but they lost to Indonesian youngsters Pramudya Kusumawardana-Yeremia Rambitan.

“Aaron should stop trying too hard once he and Wooi Yik reach the semi-final stage. His performance drops and his unforced errors increase.

‘‘He has to get this problem off his mind if he wants to win a tour title,” said Rexy.

“His thinking becomes cluttered and all the tactics and game plan backfire on court. Whether he is playing in the semi-finals or final, he should just treat the match like a first-round or second- round match.

“We have spoken to him on this repeatedly. We can advise and coach him but once on the court, he is the one who needs to overcome this problem.

“He needs to forget about the past results and start thinking about winning the title to boost his confidence. The fans will continue to cheer Aaron and other Malaysian players, but he still has to make it happen on the court.

“It is very unusual for a pair to have the ability to win an Olympic bronze medal but are still unable to win a tour title. They have to change this.”

Aaron had admitted that the moment he reaches the semis-finals, his performance dips and doesn’t know how to overcome the issue.

Wooi Yik has defended his partner, saying that players will have their off days and he too makes mistakes.

“It is not just Aaron but I make mistakes also. The best way is to support each other and improve our performance,” Wooi Yik had stated after losing in the semi-finals of the Indonesia Open last week to China pair Liu Yuchen-Ou Xuanyi, ranked world No. 45.

That was the seventh time Aaron-Wooi Yik have lost in the semi-final stage since 2021 besides losing in two finals in the same period. They finished runners-up in the 2021 Thailand Open and the 2022 Asian Championships.

It will not be any easier at the Malaysian Open as they will play Japanese pair Akira Koga-Taichi Saito in the first round.

Aaron-Wooi Yik have nothing to lose at this juncture and they have everything to gain if they heed Rexy’s advice. 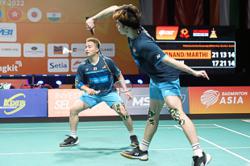