PETALING JAYA: The mixed doubles pairs will not be in for a happy homecoming in the Malaysian Open from June 28-July 3.

Newly-formed pair Hoo Pang Ron-Toh Ee Wei have an uphill battle in their opener as they are up against China’s world No. 1 Zheng Siwei-Huang Yaqiong.

The Chinese pair are in formidable form and have just topped the ranking after capturing both the Indonesian Masters and Indonesian Open titles in the past two weeks.

Another pair Choong Hon Jian-Peck Yen Wei are also unlucky to have been drawn against Hong Kong’s world No. 7 Tang Chun Man-Tse Ying Suet in the first round.

Challenging these top pairs could be doubly hard for the Malaysians as they have only been playing together for a few weeks after being paired at the beginning of this month.

However, doubles coaching director Rexy Mainaky believes his charges will give a good account of themselves.

“Since this is a high-level tournament, the players must be ready to face anyone. I hope they can give the opponents a run for their money or create an upset,” said Rexy.

Peng Soon-Yee See who have been reunited also need to be on their toes from the start as they open their campaign against Indonesia’s 19th ranked Rinov Rivaldy-Pitha Haningtyas.

Joo Ven-Liu Ying have an easier task in the first round as they play Germany’s Jones Jansen-Linda Efler but a win could pit them against the fast-improving world No. 10 Thom Gicquel-Delphine Delrue of France.

Meanwhile, only Kian Meng-Pei Jing or Soon Huat-Shevon can move to the second round after they were drawn to play each other. The winner could meet South Korea’s world No. 99, Kim Won-ho-Jeong Na-eun. 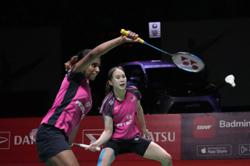 Olympics champ Yufei on mission to help China regain glory days
Kento’s motor running again
It’s double the trouble
Fadia has big shoes to fill but she’s charting her own path
Indonesia’s current mixed pairs a cause of concern for Nova
The legend’s ‘chosen one’
Emotional cheers all round for king of home tourneys
Icon serves drop shot on social media overload
Double blow as Aaron-Wooi Yik and Sze Fei-Izzuddin fall in semis
Rexy: Patience a virtue that Pearly-Thinaah lack