Amazing feat: Cheah Liek Hou defeated Japan’s Taiyo Imai 21-11, 21-19 in the SU5 final yesterday to continue with his winning streak that started in 2019.

Favourite Liek Hou defeated Taiyo Imai of Japan 21-11, 21-19 in the SU5 final yesterday to continue with his winning streak that started in 2019.

The Paralympic champion had started his unbeaten run by clinching the Denmark Para championships in 2019 and is now undefeated in 54 matches in the men’s singles.

Prior to the Dubai event, Liek Hou had won in Bahrain last Sunday.

“I created another record for myself today and consider this a perfect 10 for me,” said Liek Hou.

“Quite satisfied with my achievement although I did not have the best of preparations before competing in Bahrain and Dubai as the tournaments were held just a couple of weeks after the Hari Raya celebrations.

“But my performance in these two tournaments were definitely better than the way I played in the Brazil Para International (in April).”

In the men’s doubles, Liek Hou and his new partner Fareez Anuar secured their second title in a row after beating Indonesian pair Suryo Nugroho-Oddie Kurnia Putra 17-21, 21-15, 21-9 in the final.

Liek Hou had clinched the doubles title in Bahrain with Fareez which was their first international tournament as a pair.

Meanwhile, Ikhwan Ramli finished runner-up in the men’s singles WH1 (wheelchair) after losing 21-8, 21-16 to Choi Jung-man of South Korea in the final.

Jung-man completed a double in the event when he partnered Kim Jung-jun to beat Ikhwan and Noor Azwan Noorlan 21-13, 21-12 in the men’s doubles final. 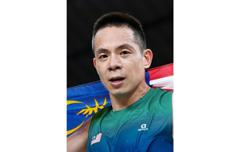