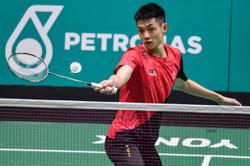 That can best describe the sacrifices Lee Zii Yii has made to be part of her younger brother Lee Zii Jia’s journey as an independent badminton player.

The 26-year-old former national player has abandoned plans to further her studies in Physiology abroad to take up the role as Zii Jia’s team manager recently, although she has been actively involved in managing all her brother’s affairs since the latter’s 2021 All-England victory.

“I was looking at opportunities to further my studies overseas but I had difficulties because of the Covid-19 pandemic,” said the Universiti Malaya (UM) Sports Science (Sport Exercise) student from 2016-2020.

“Then came by brother’s big win at the All-England, and suddenly everything changed. There was so much interest in him and I was helping out. And when he turned professional this year, there was so much to do and it was then that I decided to give him full support as a full-time team manager.

“He needed someone whom he can trust and I decided to put all my plans on hold to support him.

“It’s a new challenge and a big change as I know little about managing and administration work.

“I’ve to look at contracts and legal matters, which were new to me but I’ve adapted. We have a lawyer now to advise us as well.’’

Zii Yii was with the Badminton Association of Malaysia (BAM) for eight years from 2011-2019 but a knee injury hampered her progress as a singles player.

“I joined BAM first when I was 14 and Zii Jia joined a year later. I did not make it but I’m glad he did.”

On the success of her brother, Zii Yii said she was not surprised as her family members were into the sport.

“My parents sent Zii Jia and I for a holiday camp when we were young and that’s where our love for badminton grew,” she said.

“My younger brother Lee Tao (21) is an all-rounder as he has dabbled in different sports, including basketball and badminton, but he did not want to pursue badminton because he said he didn’t want to suffer in training like us,” she said, bursting into laughter.

“Zii Jia, however, was very determined to make it work.”

She admitted that Zii Jia was a “troublesome” child from his younger days.

“But in a good way though. His pathway has always been difficult but that had only made him a very determined person,” she said.

“He was bullied in Bukit Jalil Sports School but came through it. He experienced a low in his career at the Thailand legs but bounced back to win the All-England. He then got himself into trouble when he turned professional but fortunately, all is settled now. ‘’

The world No. 7 was stopped from competing in tournaments for two years but the decision has been reversed. Zii Jia now has a team of his own, including coach Indra Wijaya, to chart his success.

“He has his own way of handling things and despite all the ups and downs, I love my little brother very much.

“I believe this is a transitional year for him and I’m confident he will do well as an independent player. I’m currently following him for every tournament but once he has settled down, I will be able to manage the administration part from home,” added Zii Yii.

Zii Jia has skipped the Korean Open next week to prepare for the Asia Badminton Championships (April 26-May 1) in the Philippines and the Thomas Cup Finals (May 8-15) in Bangkok.