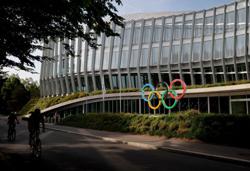 Paying the price: China’s Tan Qiang (left) and He Jiting lost to Indonesia’s Mohammad Ahsan-Hendra Setiawan in the men’s doubles semi-final at the All England on March 19. — AFP

PETALING: Betting continues to be a big problem in badminton, but four Chinese players seem to have only got a slap on the wrist for the offence.

The men’s doubles players – world champion and Olympics silver medallists Li Junhui-Liu Yuchen and their current No. 1 He Jiting-Tan Qiang have been found guilty for failing to use best efforts to win a match at the Fuzhou China Open in 2018.

In the quarter-final match three years ago, Junhui-Yuchen went down to Jiting-Tan Qiang 15-21, 21-14, 19-21. The lower ranked pair Jiting-Tan Qiang went on to lose to Marcus Fernaldi-Kevin Sanjaya of Indonesia in that final.

The four shuttlers were found to have violated Article 3.1.2 of the 2017 Badminton World Federation (BWF) code of conduct in relation to betting, wagering and irregular match results during a hearing on Jan 24 this year.

BWF in a statement yesterday said: “The Independent Hearing Panel (IHP) issued three-month bans from all badminton-related activities to each player.

“These sentences were suspended for a probationary period of two years starting Jan 25, 2022. Should there be any repeat offences within the two-year probation period the three-month bans will take effect.

“Each player was also required to forfeit their prize money from the Fuzhou China Open 2018.”

It is perplexing as according to the ruling, the players only have to pay the small fine. The three-month ban will only take effect if they are found to have violated the offence again in the next two years starting Jan 25.

BWF stated that the players had the right to appeal the decision to the Court of Arbitration for Sport (CAS) within 21 days of the notice of the reasoned decision, however, no appeal was lodged.

The timing of the punishment for the Chinese players however had come at an awkward time and after three years since the foursome committed the offence.

While waiting for the outcome of the hearing that took longer than usual, Junhui-Yuchen went on to win a silver at last year’s Tokyo Olympic Games and were members of the team that won the 2018 Asian Games, 2018 Thomas Cup Finals and the 2019 Sudirman Cup.

Li Junhui, however, announced his retirement last year while his partner Yuchen and Jiting-Tan Qiang went on to play in the recent German Open and All-England in Mulheim and Birmingham.

In the German Open, Malaysia’s Goh Sze Fei-Nur Izzuddin Rumsani defeated two Chinese scratch pairs, which involved some of these top players en route to winning the title. They defeated Jiting-Zhou Haodong in the semi-finals and knocked out Yuchen-Ou Xuan Yi in the final.

At the All-England, world No 17. Jiting-Tan Qiang went until the semis before losing to Mohammad Ahsan-Hendra Setiawan of Indonesia.

National coaching doubles director Rexy Mainaky was shocked with the outcome of the IHP.

“I’m sad to hear this news. Betting is no good, it will kill the players’ future,” said Rexy.

“What has happened to these Chinese players is a warning to the rest of the players. I hope our players will think twice before doing anything silly like this,” added Rexy.