KUALA LUMPUR: Mixed doubles ace Goh Liu Ying may make an eagerly-anticipated return to competition with a new partner in March next year.

All eyes have been on the 32-year-old as Liu Ying has yet to make any announcement pertaining to her playing career following the end of her 13-year partnership with Chan Peng Soon this month.

Peng Soon, 33, has rejoined the national team to pursue his ambition of making his third Olympic Games appearance in Paris 2024.

Yesterday Liu Ying revealed that she’s currently in talks with sponsors as well as having a few candidates in mind to team up and the news should excite her fans.

“There are negotiations going on (with potential sponsors), but I can’t provide any details for now,” said Liu Ying after attending a launching ceremony by the Rev Rehab Malaysia yesterday.

“But I’ll definitely play on, once I have secured the sponsorships.

“Apart from funding, there are a few more matters that need to be ironed out like which tournaments that my new partner and I can compete.

“If all is confirmed, the earliest that I may return to competition will be March.

“I’m not ready to let go of badminton just yet.”

Although Liu Ying did not reveal the name of her future partner, she hinted that she was looking for a fresh start with a new partner.

“Ideally, it will be good to team up with a partner who’s a highly-ranked player as it will help us make the cut for the World Tour events,” explained Liu Ying.

“I’d also prefer a younger partner who can make up for my lack of speed.”

Could these hints be pointing towards the possibility of Liu Ying joining forces with either Ong Yew Sin or Teo Ee Yi, who won the World Championships bronze medal recently.

Although they hardly play in mixed doubles, Yew Sin and Ee Yi, both 26 and 28 respectively, still fit the bill considering they are currently ranked No. 11.

All three players are also backed by the same equipment and apparel sponsor Li-Ning.

Asked if her history of injuries could hinder the new partnership from excelling, Liu Ying insists: “Since I have the freedom to plan my tournament schedule, I believe I can cope just fine.

“Playing a maximum of two back-to-back tournaments should be fine for me.

“Peng Soon and I had little options in the last two years because we were chasing for Olympics ranking points.

“Also, being a top 10 ranked pair, we also had to fulfil the top committed player obligations (which require them to play in certain number of top-tier events).

“The results could have been better if I had the chance to rest and recover well.”

Although they have parted ways, Liu Ying and Peng Soon still find themselves inseparable as they have now teamed up for a new rehab and physiotherapy venture.

Together with fellow Rio Olympics silver medallist Tan Wee Kiong, the trio were unveiled as business partners of Rev Rehab Malaysia in their new outlet at Bangsar Shopping Centre.

Their aim is to make Olympic-standard rehab and physiotherapy services available for the masses. 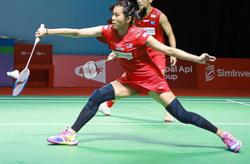