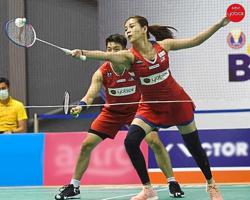 PETALING JAYA: None of Malaysia’s independent shuttlers cleared the quarter-finals of the Indonesian Open but they can afford to celebrate.

Yesterday, Peng Soon-Liu Ying and Kian Meng-Pei Jing bowed out in contrasting fashion in the last eight of the Open tournament, which was the last qualifying tournament for the Finals, but it was enough for them to remain in the top-eight cut-off for the world meet.

Kian Meng-Pei Jing, however, were no match for top seeds Dechapol Puavanukroh-T. Sapsiree of Thailand as they were blown away 10-21, 11-21.

Liu Ying was happy that the independent shuttlers had overcome hardships to reach the Finals.

“It’s great to have two mixed pairs in the top eight for the Finals.

“We hope for a good draw,” said Liu Ying.

“We have two major tournaments left this year. Besides the Finals, we will also compete in the World Championships in Spain next year.

“Peng Soon and I hope to be at our best.”

In the men’s doubles, Yew Sin-Ee Yi went down fighting 21-14, 14-21, 16-21 to world No. 1 Marcus Fernaldi-Kevin Sanjaya of Indonesia in the last eight. A day earlier, they had beaten Aaron Chia-Soh Wooi Yik.

Despite the defeat, Yew Sin-Ee Yi will be Malaysia’s sole representatives in the men’s doubles Finals after qualifying as the fourth best pair.

The professional team coach Chin Eei Hui was pleased with the players’ effort.

“It’s nice to have three independent pairs in the Finals and I believe that all of them can perform better,” said Eei Hui.

“Today, Peng Soon and Liu Ying played one of the best games but the Koreans were better.

“Yew Sin-Ee Yi continue to show improvement but they need to have more belief in themselves.

“They came very close to beating the Indonesians today. We will tighten their game before the Finals.”