As expected, the world No. 9 has set up a mouth-watering showdown with reigning champion Chen Long of China in the last 16 today.

If his imperious form when he outplayed Frenchman Brice Leverdez to emerge champion of Group M yesterday is anything to go by, expect his clash with the Chinese to be an explosive one.

Zii Jia gave the 35-year-old Leverdez absolutely no chance with his power and speed, winning the match 21-17, 21-5 in just 35 minutes.

Chen Long, 32, should have warmed up well enough after picking up a routine 21-11, 21-10 win over Spaniard Pablo Abian to advance from Group N.

Hopes are high on Zii Jia to avenge the defeat for his predecessor Lee Chong Wei, who was pipped to the gold by Chen Long in Rio 2016.

Zii Jia said he is looking forward to his fifth duel with Chen Long after he last triumphed 21-12, 21-18 in the quarter-finals of the All-England 16 months ago to draw level 2-2 in their head-to-head record.

Zii Jia said after the match: “Having watched him in action since I was a kid, Chen Long is a player whom I respect a lot.

“I can’t wait to play him tomorrow, I’m quite curious to see how he will play after his long absence from competition prior to the Olympics.

“Most our matches went on until the rubber game, and I’m preparing for yet another lengthy battle with him.”

Leverdez said Zii Jia’s performance has left him in awe that he has tipped him to win the gold.

“If he’s going to play like that, then he can win. He’s going super fast. So I think he can go very far.”

Zii Jia and Chen Long were one of the few seeded players who survived a day filled with giant-killing acts.

As many as four seeded players had been booted out with world No. 1 and Japanese gold medal hopeful Kento Momota falling victim to one of the most shocking upsets of the day.

The others were eighth seed Ng Ka Long of Hong Kong, 13th seed B. Sai Praneeth of India and 14th seed Kantaphon Wangcharoen of Thailand.

Even the second seeded Chou Tien-chen of Taiwan nearly lost to 19-year-old Brian Yang of Canada.

“I’m really shocked, but it also proves that the Olympics is anybody’s game,” said Zii Jia.

“If Momota can be knocked out, anybody can. Even Tien Chen barely made it through the group stages.” 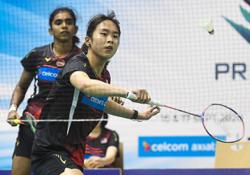 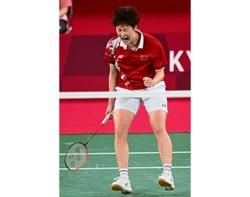