Don’t give in to nerves, play confidently, says Flandi 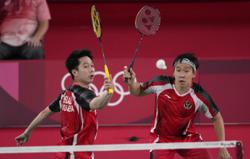 World No. 9 Aaron-Wooi Yik have been handed a tough job to pull the rug from down under world No.1 Marcus Fernaldi-Kevin Sanjaya of Indonesia in a match that has all the potential to be a cliffhanger at the Musashino Forest Sport Plaza today.

Flandi, who took charge as the boys’ coach last year, has faith in them.

“It’s a tough draw but I will help and guide them to fight. The most important thing is for Aaron and Wooi Yik to handle their nerves and play with confidence,” said Flandi.

“If they can handle these, I believe a good fight is on the cards... and who knows, the unlucky ones can turn things around.

“It’s not going to be easy for sure but I do hope they’ll fight harder than before.

“Regardless of the result, I will stand by their side.”

The Malaysian pair have lost all their previous seven matches against the Indonesians.

Wooi Yik said: “We came here with an open mind to face any opponents, so we will be ready to face Marcus-Kevin tomorrow (today),” said the 23-year-old Wooi Yik.

“I believe nothing is impossible.”