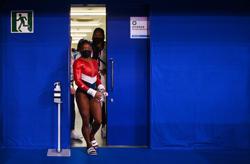 When we were rivals: Wong Choong Hann falling on court during a battle with China’s Xia Xuanze (inset) in 2011.

PETALING JAYA: It’s a normal affair to meet up with other coaches during tournaments but for Badminton Association of Malaysia (BAM) coaching director Wong Choong Hann, the Tokyo stint is quite different.

It’s special in a way as the 44-year-old returns to the Olympics for the first time as a coach.

His return to the Games marks a mini reunion of the top men’s singles shuttlers from the 2000 Sydney batch, which include Malaysia’s head coach Hendrawan and the supremos from China and Denmark – Xia Xuanze and Kenneth Jonassen respectively.

It would have been merrier if India’s chief coach P. Gopichand had made the trip but due to limited Games accreditation, he made way for the other coaches.

Of the five, the second-seeded Hendrawan and fourth-seeded Xuanze were the best performers in that batch 21 years ago by coming in second and third respectively.

Then fifth-seeded debutant and national No. 1 Choong Hann was the quarter-finalist.

He defeated Jonassen in the last 16 before going down to Xuanze, the man who went on to deny him the world title in Birmingham two years later.

“I wouldn’t say it’s nostalgic because we have been meeting each other all this while, but it’s nice to see these old friends here in Tokyo at the Olympics,” said Choong Hann.

“I managed to catch up with Xuanze and Luo Yigang whom I have not seen for a long time as China have not taken part in any competition since March last year.

“We’ve completed the cycle from playing to coaching. But I must say that I’m much more junior when it comes to international coaching compared to many of them.

“Xuanze was already there when Lin Dan won the gold in London (2012), while Kenneth started his career with England in 2010.

“So yes, it’s interesting that 21 years after the Sydney Games we are up against each other in a different role.”

On attending his first Olympics as a coach, Choong Hann said he was as equally excited as he was during his playing days.

“Apart from being in a different role, nothing has really changed. I’m here at the Tokyo Games with the same target, that’s to bring glory to the country,” said Choong Hann.

“I still want to be the best, eager to perform as ever and show what I can do even as a coach.”

Choong Hann also competed in Athens 2004 and Beijing 2008 and reached the last 16 on both occasions.

Chong Hann went to Athens as the third seed and with plenty of hopes but was beaten by eventual champion Taufik Hidayat of Indonesia. He avenged his defeat to Taufik four years later in Beijing, but was eliminated by Taiwan’s Hsieh Yu-hsing.

For Choong Hann, the best change that he has seen in the Olympics is the introduction of the group stage preliminaries to replace the single-elimination format at the London Games.

“It was a great move because it has given all players a chance to play more matches,” said Choong Hann.

“With two to three matches guaranteed, players have the opportunity to showcase themselves rather than have their campaign end with just one defeat. After all, they’ve prepared for four years.

“That’s what the Olympics is all about, it’s not just about winning, the participation itself is massive.”

Giants in the way
Liu Ying won’t throw in the towel yet despite struggle with injuries
Mountain to climb as Aaron-Wooi Yik take on world No. 1 Marcus-Kevin in last eight
Aaron-Wooi Yik reach men's doubles quarter-finals to keep Olympics dream alive
Soniia has not played a single game but already a 'winner'
Meng Yean-Mei Kuan end Olympics campaign with one win
Aaron-Wooi Yik face complicated situation after loss to Ahsan-Hendra
Peng Soon-Liu Ying’s swansong ends without a win
Quarter-finals poser after Aaron-Wooi Yik lose to Hendra-Ahsan
Chan-Goh won’t go down without a fight against Chinese pair