Olympic aim: Goh Liu Ying (front) and Chan Peng Soon are determined to make Malaysia proud as they set their sights on gold.

The yogurt-flavoured drink brand has initiated a “Sokong Wira Malaysia’ campaign to get all Malaysian supporters to root for the 2016 Rio de Janeiro Olympic Games silver medallists.

And the independent players Peng Soon-Liu Ying are grateful for the strong backing from home.

“I would never have persevered all these years without the continuous support from the whole nation who believe in us,” said Liu Ying.

“With eyes set on the gold medal in Tokyo, I am determined to make Malaysia proud.”

It’s beyond surprise that an injury-prone Liu Ying has managed to qualify for this year’s Olympics but she is determined to make it count.

“This is another chance, it makes all those countless practice hours and injuries that I suffered worthwhile,” she said.

Peng Soon, a family man to four loving children, believes the sacrifices will be worth it.

“It’s the hardest time to miss out on family times and big celebrations but they have been supportive. With all the support, motivation and rigorous training, anything is possible,” said Peng Soon on their chances in a very competitive mixed doubles event.

In conjunction with the launch on support for Peng Soon-Liu Ying, Yobick will introduce a new limited edition yoghurt drink, Yamanashi Grape.

“The new flavour launch is timely, in hopes that this will give a sense of connectivity among our consumers with the 2020 Tokyo Olympics,” said Takeshi Suma, chief executive officer of DyDo Drinco Malaysia.

Yobick has been a proud sponsor of Peng Soon and Liu Ying since 2019. 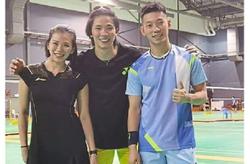 Glorious day for China as they beat Japan to regain Uber Cup trophy
Indonesia hope to end long wait for Thomas Cup glory when they face China in final
Oh boy! Jonatan knows what beating Malaysia means to all in Indonesia
Grind and sweat for it
Rashid: Bright future ahead for players after worthy displays
Worth the weight
Plan to help Ng get even stronger
Wee Kiong-Kian Meng march into semis
V Shem eyes glorious finish at World C’ships
Trust Thomas Cup star to take over from Lin Dan and Chen Long in future