The Olympic Games champion was 36.

He collapsed during his usual Monday session with some of his badminton buddies and it is suspected that he had suffered a heart attack.

According to former Indonesian star Candra Wijaya, the stocky Markis slumped to the floor while they were playing together and all their efforts to resuscitate him ended in vain.

"We were switching court after the first game ended 15-8, and suddenly I saw him collapse and he was unconscious," said Candra.

"We tried our best to revive him before we rushed him to the hospital by car.

Markis enjoyed his most successful years with Hendra Setiawan in late 2000s where they became not only the world No. 1 pair but also won the 2008 Beijing Olympics and were crowned the world champions in Kuala Lumpur in 2007.

Markis' death came three years after the demise of Jae-sung, who also died of heart attack at 35 in 2018.

His former teammate Hendra was devastated.

"I'm deeply saddened with this shocking news. He was a good partner. He was an outstanding and talented player. I am grateful to him for both the ups and downs that we went through together," said Hendra.

"We rose from nowhere to top and fought together for 14 years. Thank you Kido, good bye."

"I know Kido when I was a fan. I was one of those fanatical fans of Kido-Hendra....Kido was so energetic in the game and friendly outside of the court," said Bambang.

"We used to meet even after he retired. He liked to tease and made fun of all the those crazy times and memories we have had in the Tour. This is so sudden...I still can't believe it."
Article type: metered
User Type: anonymous web
User Status:
Campaign ID: 46
Cxense type: free
User access status: 3
Join our Telegram channel to get our Evening Alerts and breaking news highlights 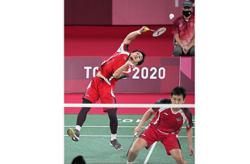 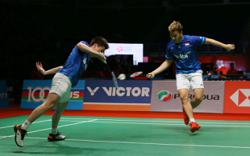 Soniia has not played a single game but already a 'winner'
Meng Yean-Mei Kuan end Olympics campaign with one win
Aaron-Wooi Yik face complicated situation after loss to Ahsan-Hendra
Peng Soon-Liu Ying’s swansong ends without a win
Quarter-finals poser after Aaron-Wooi Yik lose to Hendra-Ahsan
Chan-Goh won’t go down without a fight against Chinese pair
Jonatan has late brother in mind as he guns for glory
Chong Wei: Stop the abuse, show them support
Solid as a rock
Online abuse of our Olympic heroes uncalled for, says Chong Wei