PETALING JAYA: Mixed doubles ace Goh Liu Ying is thrilled to bits at being chosen as one of Malaysia’s two flag bearers at the Tokyo Olympics.

The 31-year-old said she did not see it coming and described the appointment as a huge recognition for women’s badminton and sport as a whole in the country.

“I have never been a flag bearer at any multi-sport Games before and now I’ll be carrying the Jalur Gemilang at the Olympics!

“This has to be one of the greatest honours that has ever been bestowed on me.

“Badminton is undoubtedly one of the sports Malaysia is well known for.

“But all this while, we’re famous because of our men’s shuttlers.

“So, I really never thought it could be me. Moreover, I haven’t officially qualified for the Games yet.

“I want to thank the Olympic Council of Malaysia (OCM) for this once-in-a lifetime opportunity.”

The OCM had heeded the call by the International Olympic Council (IOC) to break away from tradition by choosing a male and female athlete as the flag bearer.

Archer Khairul Anuar Mohamed, a silver medallist at the 2019 World Championships, will partner Liu Ying at the opening ceremony.

The IOC amended the protocol last year to show their support for equal treatment of both genders.

Liu Ying is the second female flag bearer to be given the honour after diver Pandelela Rinong at London 2012.

The Sarawakian went on to become the first Malaysian female athlete to win an Olympic medal when she claimed bronze in the 10m platform individual.

In Rio, Pandelela teamed up with Cheong Jun Hoong to clinch a silver in the 10m platform synchro, a feat that was matched by Liu Ying. 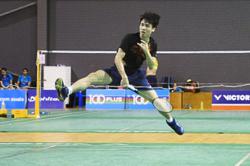 Wyman and Co out to stamp their mark in Lithuania
Defiant BWF aim to push for new scoring system
Jun Hao and friends set out to shine in Spain Masters
Shuttler continues dominating form to clinch SU5 men’s singles title
Former national shuttler Chong Wei shares touching story during Raya
Juggling two loves not a grey area for Greysia
In old but good hands
Badminton-Singapore Open cancelled due to COVID-19
Spain poser for June Wei, Jin Wei and Kisona
Being away from competition for too long may be good for China