No happy ending: Denmark’s Viktor Axelsen in action against Finland’s Kale Koljonen in the men’s singles semi-final of the European Badminton Championships in Kyiv, Ukraine, on Saturday. — AP

PETALING JAYA: It was not an ending that Viktor Axelsen had wanted at the European Championships but the Dane is ready to move on after testing positive for Covid-19 in Ukraine.

The top seed and defending champion had to withdraw just hours before the men’s singles final against compatriot Anders Antonsen after his second PCR test returned positive for Covid-19 in Kyiv on Sunday.

After going through tests throughout the week, the 26-year-old found out that he was positive after pulling off a 21-14,21-14 win over Finland’s Kalle Koljonen in the semi-finals on Saturday.

That led him to a second PCR test later on Saturday, when the outcome was reconfirmed as positive just hours before the final day action yesterday.

Viktor said he had to accept his predicament as just another challenge in an athlete’s life under the new norm.

“There is no doubt that there is nothing I would rather do than stand in the final against Anders, ” said Viktor, according to a statement by Badminton Denmark.

“I am also really sorry that it will take another two weeks before I can get back home and see my family again (wife Natalia and daughter Vega).

“But that’s how it is. These are the conditions we have to play under in this time where isolation and quarantine is a risk that we know is present when we compete.

“I still feel no symptoms of illness and I’m otherwise in good spirits.

“Congratulations to Anders on the gold medal and thank you all for your support, ” added Viktor, who had been eyeing his third European title after having won it in 2016 and 2018.

The world No. 2 had started the year on a positive note when he won both the Thailand Open titles in January before going down fighting to Antonsen in the final of the World Tour Finals in Bangkok.

In March, he bagged the Swiss Open title and finished runner-up to Lee Zii Jia of Malaysia in the All-England.

Next, he will be out to make his mark in the Malaysian Open from May 25-30. He is seeded second behind world No. 1 Kento Momota of Japan. 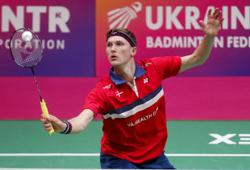