Looking for breakthrough: Toh Ee Wei hopes that her fortune will change in the mixed doubles under head coach Paulus Firman. — Courtesy of How Kim Tho

PETALING JAYA: Toh Ee Wei is back for a third spell with the national team and this time she wants to make it last longer but as a mixed doubles player.

The 21-year-old Ee Wei, dubbed a promising star in the women’s doubles, left the Badminton Association of Malaysia (BAM) last month but decided to make a comeback after taking a short “break”.

She will report for duty in Bukit Kiara today.

“I left because I just needed some rest, but I’m glad to be back again, ” said Ee Wei, who won a silver medal with Pearly Tan at the World Junior Championships in Canada in 2018 but quit a year later due to a health issue.

She was handed a second chance to resurrect her career last year July under doubles head coach Chan Chong Ming.

Ee Wei had hoped to reunite with Pearly but her former partner had already made steady progress with M. Thinaah.

Instead, she was paired up with Anna Cheong but they did not get to compete because of the Covid-19 situation.

Ee Wei said training without tournaments had affected her.

“I’ve not competed for a long time, longer than most of my teammates... in fact, I’ve not played since the world junior in 2018, ” said Ee Wei, who underwent nose surgery due to a chronic sinus problem.

“After the world juniors, I had the nose issue. Then, when I got better, I did not get to play in any tournaments. It’s hard just to keep training.”

Now that she is back, Ee Wei hopes that her fortune will change in the mixed doubles under head coach Paulus Firman.

“I don’t know who my partner will be but I hope to start playing in the mixed doubles. I’ve to start from smaller tournaments as I do not have any ranking right now, ” she added.

She could have been partnered with Tan Kian Meng but he left to become an independent player with Lai Pei Jing. 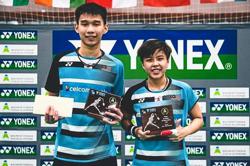