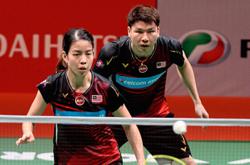 Out in the cold: Soniia Cheah is one of five seniors dropped by the Badminton Association of Malaysia.

PETALING JAYA: Chin up and move on.

While as surprised as everyone else over the Badminton Association of Malaysia (BAM)’s shocking decision to axe five seniors from the national team, former national No. 1 Datuk Lee Chong Wei has encouraged his former teammates to march forward without any regrets.

All of them are in their final lap of qualification for the Tokyo Olympic Games, scheduled to be held in July, with some having a better chance than the others.

While sympathising with the players over their unexpected exits just two months before the Olympics qualification ends, Chong Wei, who is also Malaysia’s chef de mission for the Games, hopes the players will not give up on their dream.

“Every player knows that one day, they will either retire or be dropped from the national team for different reasons.

“Unfortunately, these players have been sacked when they had least expected it, ” said Chong Wei, who retired after recovering from nose cancer in 2019.

“I’m not a coach or a council member in the BAM, I’m unable to comment on why they have been dropped or what do I think of the decisions.

“But as a former player, I just want to encourage these players... life goes on.

“Most of these players have been with BAM for more than five years, some even more than 10.

“They have worked hard, some have come through injuries and some had to balance between studies and sport. There have been sacrifices.

“I know these players are upset, because they were not prepared but there are options out there.”

If they are determined enough, Chong Wei said they could qualify for the Olympics as independent players.

“There are several seniors, who are already doing well as professionals. I know, the timing is tough, as it’s difficult to get sponsors during the Covid-19 pandemic but I hope they will not lose heart, ” he said.

Having competed in four Olympics, and winning a silver in every edition since the 2008 Games, Chong Wei says he understands every athlete’s dream to compete at the Olympics.

“Everyone wants to compete in the Olympics but not everyone can win. The United States, China and India have big representation at every Games but not all their players win.

“It’s not easy to be one of the millions to represent the nation. At the 2016 Rio Games, I was the only one expected to win a medal but Chan Peng Soon-Goh Liu Ying and Goh V Shem-Tan Wee Kiong pulled off a surprise by winning silvers.

“Anything can happen at the Olympics. No one wants to go there as a passenger.

“I hope these athletes will get the support they need to qualify for the Olympics.”