Going for glory: Nigerian shuttler Opeyori is set for an Olympics debut in Tokyo next year.

PETALING JAYA: As one of the greatest Malaysian shuttlers to ever grace the game, it comes as no surprise that Lee Chong Wei is idolised by many.

Although it has been 1½ years since the 38-year-old hung up his racquet, Nigerian player Anuoluwapo Juwon Opeyori still looks upon Chong Wei as an inspiration.

Opeyori, 23, last year’s African champion and African Games gold medallist, has provisionally qualified for the Tokyo Olympics next year in both the singles and doubles.

He is on course to make the 40-man field as he is currently 38th in the Race to Tokyo singles rankings.

In the doubles, Opeyori and Godwin Olofua are presently occupying the continental berth for the 16-pair competition by virtue of being the second highest-ranked pair not from Asia and Europe.

So with an Olympics debut on the cards, how does Opeyori prepare for it?

Opeyori spent time studying the playing styles and techniques of his idol by reliving Chong Wei’s matches online and then trying to emulate his moves in training.

“Sometimes when I play, I see myself as Lee Chong Wei, ” Opeyori told the Olympic Channel.

“I will tap into his spirit to play, even in tournaments. I admire Lee Chong Wei because of his style of play, he is so fast on court.

“If you want to play like him you have to be ready to fight.”

It will be a dream come true for Opeyori to compete at the Olympic especially having just joined the national team barely three years ago.

“I hope that my achievements will inspire more youngsters to take up the sport and believe that they too can do it.” 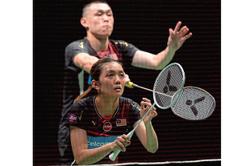