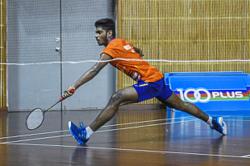 PETALING JAYA: Datuk Misbun Sidek is smiling from ear to ear after watching the performance of several shuttlers in the 100Plus National Junior Ranking Challenge.

The eight-day internal tournament at the Juara Stadium in Bukit Kiara will end today and Misbun has picked Eogene Ewe and Siti Nurshuhaini Azman as players with potential.

However, both experienced contrasting fortunes in their matches yesterday.

Misbun, who is the national junior development director, was pleased with Eogene’s determination.

“He battled for more than an hour. He is the youngest in the group but this Perak boy showed tenacity in his game,” said Misbun.

“Although he lost, he has fighting spirit. He is one of the players we have earmarked as he has the knack to beat higher-ranked players.”

Misbun is also pleased with the efforts shown by 16-year-old Nurshuhaini.

“She is a determined player. She goes after every shuttle and takes everything that is thrown at her.

“Overall, I’m happy with the juniors’ performances. They have only been training for 13 weeks but they showed plenty of commitment.”

Meanwhile, Nurshuhaini is happy that she would be promoted to Group A after recording her second win yesterday.

“I’ve been playing better in this playoff round compared to the tournament in October. The additional training is showing its effect,” said Nurshuhaini, who was Group B champion in last month’s ranking challenge.

“Group A will definitely be more challenging because there will be better players there which means I will have to work even harder.”

Jing Wen will now have to beat Loh Zhi Wei to accompany Nurshuhaini in Group A. 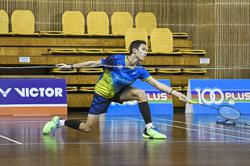