But the fifth-ranked Ong Zhen Yi believes the rankings will not hold water when the 100Plus National Junior Ranking Challenge begins at the Academy Badminton Malaysia (ABM) in Bukit Kiara today.

Zhen Yi, who turns 17 on Dec 1, is aiming to overcome a couple the higher-ranked opponents in Group A to achieve a top-three finish in the round-robin contest.

The top-three finishers in the Group A will earn the right to play against three selected players from the senior back-up squad while promotion and relegation battles are also being introduced to spice up the internal meet.

In Group A with Zhen Yi besides the Big Four are Anson Cheong, Chia Jeng Hon, Chua Kim Sheng, Jimmy Wong and V. Poopathi. All nine players are aged 18 and under.

Another twenty-two from the same age group will be placed in Groups B, C and D according to the rankings.

The race for the top-three finish in the Group A will take centre stage and Zhen Yi wants to make his presence felt.

“It’s going to be one exciting contest, I can’t wait to get cracking after an eight-month break, ” said Zhen Yi, who last competed at the National Under-18 Championships in Bukit Kiara, in February.

“I aim for a top-three finish to get the opportunity to play against the seniors.

“Jacky will start as the overwhelming favourite, followed by Ken Yon, Justin and Fazriq. If I’m able to beat one or two of them, then I will have good chance to finish in top three.”

Of the four, Zhen Yi had only played Fazriq and Ken Yon.

“I stand a chance against anyone if play to my true ability, ” said Zhen Yi.

“I will also have to tread with caution against the others. Everyone are taking the tournament seriously because it involves promotion and relegation.”

The round-robin contest will be completed on Friday, followed by the promotion and relegation matches from Oct 20-23.

Prior to this, the Badminton Association of Malaysia’s (BAM) have also hosted the Invitational Championships and Presidents’ Cup to make up for the absence of international meets due to the Covid-19 pandemic. 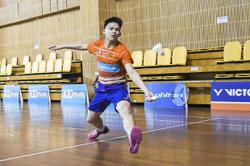