A good move: Soniia Cheah welcomed the idea to include all the players in the national camp in the mixed team event.

PETALING JAYA: Soniia Cheah has given the thumbs-up to the Badminton Association of Malaysia’s (BAM) mixed team championships, admitting that it will keep the players on their toes.

The BAM will field four teams during the mixed team event from Nov 6-12 at the Academy Badminton Malaysia (ABM).

It’s similar to the Sudirman Cup but will have more events.

There will be seven instead of five, with the introduction of a second men’s singles and a three-on-three match.

All matches will be played in an 11x5 rally scoring format.

Soniia, who is the country’s top women singles player, welcomed the idea to include all the players in the national camp.

“The tournament is definitely a good idea to keep us all motivated during our off season, ” said Soniia.

It will be the national team’s third local tournament since the Covid-19 pandemic put a halt to all activities after the All-England in March.

The BAM had also hosted the internal ranking and the President’s Cup over the last two months.

The team won’t have any international tournaments until end of this year following the Badminton World Federation (BWF)’s decision to postpone the Thomas-Uber Cup Finals, two legs in Asia and the World Tour Finals to next year.

The only tournament left in the calendar is the Denmark Open in Odense from Oct 13-18 but the Malaysians are not competing.

“We can’t do anything now but accept the current situation. We have to take care of our own well being, ” she said.

Soniia promised not to waste any time although there could be the tendency to take it easy.

“I aim to make full use of my time. I want to improve in every area of my game as much as I can, ” added Soniia, who has a good chance to qualify for next year’s Tokyo Olympic Games. 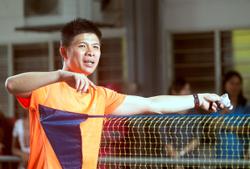 Choong Hann to axe players after National Championships
Time to step up
Asian meet upgraded to premier Olympic qualifiers
‘Unique’ junior shuttlers Aaron and Chun Cher dream big
Legend Rashid reminisces on great lefties of the past
Hoo and Cheah keep fingers crossed for Bangkok
A good mix on the cards
Tat Meng gets coaching extension in S. Korea
Mi$$ed chances
Give me a year, and I’ll catch up with my seniors, says Letshanaa