KUALA LUMPUR: The absence of international tournaments at least until September is forcing the Badminton Association of Malaysia (BAM) to get really creative.

The national body are now planning a second internal tournament, a Thomas Cup-style team event pitting the national shuttlers against their professional counterparts.

The first internal tournament, the BAM Invitational Championships, is already under way, with the men’s Division Two being played now. Division One will begin next week with the top two players from the lower division.

If all goes well, the second tournament is set to take place in mid-September. BAM want to use the meet to help Thomas Cup-bound players prepare for the Finals in Aarhus, Denmark from Oct 3-11.

An exciting battle is certainly on the cards as the Lee Zii Jia-led BAM side could face a formidable independent team made up by the likes of Liew Daren, Soong Joo Ven and Iskandar Zulkarnain Zainuddin and doubles pairs Goh V Shem-Tan Wee Kiong and Ong Yew Sin-Teo Ee Yi.

“Initially, we were planning to have another leg of the on-going tournament but after getting feedback from the coaches, we thought it might be a good idea to hold a team tournament instead, ” said Kenny.

“Since there are no tournaments in September, these are the several alternatives we can think of. After all, the team are also in the midst of preparing for the Thomas Cup Finals as well.

“Having a BAM versus independent battle can generate some excitement among local fans.

“However, the plan is to do it only for the men’s team for now as there are not enough women shuttlers available to form an independent team.”

The winners’ purse for the singles event is RM5,000 while the winning doubles pairs would take home RM7,500.

Compelling reason for shuttlers to stay where they are 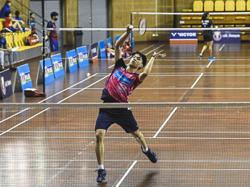