PETALING JAYA: Seasoned campaigner Goh Liu Ying is hoping the Badminton World Federation (BWF) will be fair to mixed doubles shuttlers in the race for the Tokyo Olympic Games.

While happy with the world body’s decision to extend the qualification period from January to April next year, Liu Ying, however, said that one of the new rulings may turn out to be unfavourable for Malaysia’s mixed pairs.

Recently, BWF have made an exception to China and Hong Kong to earn their Olympic points from the Asia Team Championships next year.

They made the decision as both countries lost out on a chance to earn Olympic points at this year’s edition in February as they were not allowed to enter the Philippines due to the Covid-19 pandemic.

Liu Ying said she understood BWF’s rationale but the problem is that the status of the Asia team event next year would be different.

This year’s meet was the qualifiers for the Thomas-Uber Cup Finals from Oct 3-11 in Aarhus, Denmark, thus the men and women’s competitions were held separately.

Next year, it will be a mixed team format, similar to the Sudirman Cup.

“Chan Peng Soon and I did not play in Manila so did many other mixed doubles pair,” said Liu Ying.

“So now, the BWF are giving China and Hong Kong a chance to earn Olympic points at next year’s meet and since it’s a mixed team event, their mixed pairs will have an advantage.”

The 2016 Rio Olympics silver medallists are currently in seventh position in the Road to Tokyo ranking. The other Malaysians in the running are Goh Soon Huat-Shevon Lai Jemie (11) and Tan Kian Meng-Lai Pei Jing (13).

A country can have a maximum of two pairs if both are in the top eight.

“With the race for the Olympics a close contest, every qualifier is important. We are trying to get two mixed pairs to qualify.

“What the BWF could do is drop next year’s event as one of the Olympic qualifiers or they can host the men and women’s team events again instead of mixed,” she said.

Meanwhile, Liu Ying will not report for the Road To Tokyo centralised training starting today at the Academy Badminton Malaysia due to Peng Soon’s family commitment.

“We’ve to delay our court training but we are still keeping ourselves fit, like playing tennis,” added Liu Ying. 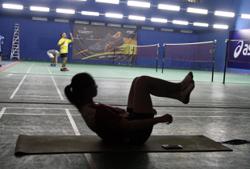