Be happy, don’t worry: Vivian Hoo (left) and Goh Yea Ching posing for the camera after a hard day’s training at the Academy Badminton Malaysia (ABM).

KUALA LUMPUR: Do not, for a moment, think of pint-sized Goh Yea Ching as the weak link in the women badminton’s doubles department. She is definitely not, otherwise she would not have earned the nickname Rambo for her gung-ho approach on court.

And the little Rambo hopes to make a big impression when she debuts at the Uber Cup Finals in Bangkok, Thailand, from May 20-28.

“My coach Rosman Razak (women’s doubles head coach) gave me that name. Now, everyone calls me Rambo and I’m used to it,” said the soft-spoken Yea Ching.

“I’m aggressive on court and will fight all out. I do not fear anyone.”

The 22-year-old hopes to bring prominence to the women’s doubles game in Bangkok. She is likely to play with Vivian Hoo or Chow Mei Kuan in the Finals.

“I’m so excited to participate in my first Uber Cup Finals, I’m lucky to be selected,” said Yea Ching, who joined Bukit Jalil Sports School (BJSS) when she was in Form 1.

“Women’s doubles is always in the shadows of other events but I hope, we’ll do well, to get due recognition,” said the third year Sports Science student from University Malaya (UM).

Yea Ching has not had a regular partner since she made the national team four years ago but she always does well with whoever she is paired with.

She has played with Mei Kuan and Joyce Choong and last week, she teamed up with Vivian for the first time at the New Zealand Open and they did quite well before bowing out in the second round.

“I can adapt quickly and I learn from every partnership. The match with Vivian was good. She told me to be patient ... I learnt a lot.”

“I know my coach will find the best partner for me but for now, I just want to give a good showing at the Uber Cup – with whoever I’m fielded with.”

Malaysia are in Group D with defending champions China, Indonesia and France and although it looks tough to meet the quarter-final target, Yea Ching said: “Our opponents are ranked higher than us but we’ve nothing to lose.

“If we have the right attitude, we’ll be able to give them a tough fight.” 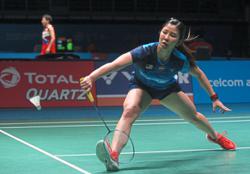 Taking one for the nation 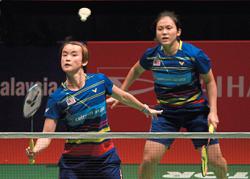 Vivian’s hopes of playing in her last Uber Cup fading