KUALA LUMPUR: Shuttler Zulfadli Zulkifli claimed he is a victim of the Badminton World Federation (BWF) and will seek justice to clear his name over match-fixing allegations.

The 25-year-old also apologised to all Malaysians for the negative publicity over the issue, but insisted he was innocent.

The BWF recently has served him with a 20-year ban.

“I would like to humbly apologise to all Malaysians, my family, and my fellow badminton players for the shame and humiliation the BWF decision against me has brought to others,” said Zulfadli during a press conference here on Friday.

“I am not apologising for match-fixing for I did not do it. I am apologising because of the decision of BWF against me. I am not admitting to the charges against me,” he added.

Zulfadli said he will seek the help of the Badminton Association of Malaysia (BAM) and Youth and Sports Ministry to pay the fine and to appeal to the world body.

On Tuesday (May 2), the BWF Ethics Hearing Panel slapped Zulfadli with a 20-year-ban for “actual and attempted match- and point-fixing" which was "for the purposes of betting”.

The panel also served a 15-year ban on Tan Chun Seang for the same offence.

After a two-year investigation, the BWF said it had enough evidence of match-fixing between 2013 and 2016, including text messages.

When asked about those conversations, Tan said they were “jokes” while Zulfadli claimed he discussed matters other than match-fixing.

BWF have only caught the takers what about the givers 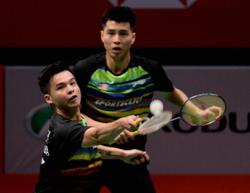 Taiwan Open is on as planned despite the odds