Chong Wei all fired up 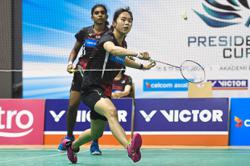 KUALA LUMPUR: The adage “every cloud has a silver lining” aptly describes what national shuttler Lee Chong Wei has gone through in the past few weeks.

He was down and out after his first-round loss at the World Championships in Glasgow last month.

But then some “good things” happened and re-energised his desire to pursue more glory for the country although he will be 35 next month.

“I’m more fired up now. A few incidents that happened in the last two weeks have given me the motivation to keep on fighting for honours in badminton,” said Chong Wei after a training session at Academy Bad­minton Malaysia (ABM) in Bukit Kiara.

Chong Wei turned up on the final day of the Kuala Lumpur SEA Games badminton action on Aug 29 to give away prizes to the winners. What transpired blew him away.

“It was my first public appearance after the first-round loss. I was expecting a cold reception, but the fans cheered so loudly at the mere mention of my name at the Axiata Arena. I felt comforted and overwhelmed,” said Chong Wei, who lost to Brice Leverdez of France in Glasgow.

He was inspired by Football Association of Malaysia (FAM) president Tunku Ismail Sultan Ibrahim’s motivational talk, which was posted on Facebook, to the players after their SEA Games final defeat.

“All these have inspired me to come out of my defeat stronger – there’s still a future if I put my heart and soul into it,” said Chong Wei, who is now looking forward to the Japan Open in Tokyo from Sept 19-24 with more confidence.

There was more good news for Chong Wei.

He had earlier received his Datukship from Penang and the Datuk Wira title from Malacca last year.

To top it all off, Chong Wei has also been selected as one of the recipients of a special award for his contribution to the nation during the Hari Malaysia celebrations on Sept 16.

“Since I returned from Glasgow, the fans have not given up on me, the government continues to recognise my contribution and badminton leaders are still giving me their support,” said Chong Wei.

“My family is there and so are my teammates. What else can I ask for?

“It’s like God does not want me to stop playing badminton,” he said, bursting into laughter.

“The defeat (to Leverdez) was hard to accept initially because I didn’t play well despite all my sacrifices,” he said.

“I gave my everything in training (under Datuk Misbun Sidek and Hendrawan). I even slept in a separate room from my wife (Wong Mew Choo) and went to bed as early as 9pm.

“My mind was blank when I returned home from Glasgow. I didn’t touch the racquet at all after my return. I didn’t even watch any matches. I spent time with family, went jogging and swimming, worked out in the gym – just to clear my mind and relax.

“I know now what went wrong. I put too much pressure on myself.”

So, how will Chong Wei handle himself at the Japan Open?

“I’ll go to Japan with a simple approach – enjoy my game and give my best,” he said.

“Winning will be great but losing is also part and parcel of the game as long as I know that I’ve given my best.” 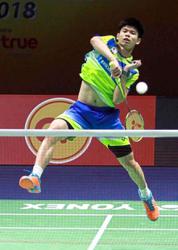