Kim Hock on the hunt for young badminton talent

KLANG: The first season of the Kopiko Purple League (KPL) is done and dusted, but former Olympic men’s doubles silver medallist Yap Kim Hock is not taking a break just yet.

Driven by a passion to find new talent for the country, Kim Hock launched an Under-19 state development programme under the Klang United Badminton Club (KUBC).

In the inaugural KPL which ended last month, KUBC, owned by Kim Hock, finished ninth out of ... teams. Unlike the other teams, KUBC were represented mostly by juniors.

Under the development programme, Kim Hock hopes to identify talent for Selangor as well as Malaysia.

Kim Hock is one of the coaches together with former men’s singles international Lim Chen Wet.

Kim Hock, a national chief coach from 2004-2008, said he was disappointed with the lack of players coming up through the ranks.

“I’m determined to get to the root of the problem. Many juniors give up badminton when they don’t get selected into the BJSS (Bukit Jalil Sports School). BJSS can accommodate only 10 players at every intake. What happens to the other budding players?

“It does not mean that they are not good enough if they don’t make it to the BJSS.

“With the Under-19 programme in place, we hope to give these young talented juniors the opportunity to excel as well as to provide a bigger talent pool for the country.

“The goal is to develop them from district to the state level. And hopefully they graduate to the national level. All these players will be fully funded by our club,” said Kim Hock, who received a RM30,000 sponsorship for the programme from businessman Datuk Seri Lee Kuan Yew.

Kim Hock added that the formation of the programme was also in line with the KPL’s future plan of having a second-tier professional league for Under-19 players. 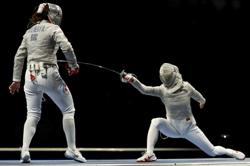