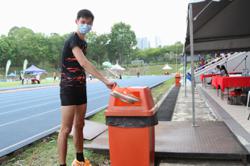 PETALING JAYA: Lee Hup Wei has mixed emotions ahead of the Malaysian Athletics Grand Prix in Bukit Jalil this weekend.

The high jumper is itching for competitive action but he is also keeping things in perspective as he has not competed in the last 14 months.

That is why he is not setting any target although a good performance will boost his hopes of earning a third Olympic appearance in Tokyo in July.

The former Asian champion has yet to qualify for the Games and this weekend’s competition at the National Sports Council training track offers him a shot at hitting the qualifying mark of 2.33m to seal his place.

Hup Wei, who last featured in the Sydney Classics in February last year with an effort of 2.16m, is unsure of his current form.

And adding to his predicament, he was tested positive for Covid-19 in January.

“It has been 14 months since I last competed because of the pandemic. I’m not sure whether I will be able to do a decent jump, ” said Hup Wei, who featured in the 2008 Beijing and 2012 London Olympics.

“It’s going to be a challenge to get a good mark but it will be a boost to my Olympics hopes if I can win the gold.

“My focus this year is the Olympics and I need to compete in as many meets as possible to get a good jump.

“It should also be my last Olympics as I don’t think I will still be competing in Paris in 2024, ” said the 33-year-old.

If Hup Wei fails to beat or equal the qualifying mark, he can still feature in Tokyo based on his world rankings.

He is currently ranked 18th but needs to remain among the top 32 by end of June to earn his ticket.

Hup Wei became the first Malaysian to qualify for the final in the World Championships in Doha, Qatar two years ago, where he did a personal best of 2.29m in qualifying.

In the final, he cleared 2.27m to finish eighth.

The four-time SEA Games gold medallist has been training under Uzbekistan coach Aleksandar Gasparyan for the last two years.

“He helped me jumped 2.29m in the world championships.

“With him guiding me, I think I can do another decent jump this year, ” he added.