PETALING JAYA: Triple jumper Mohd Hakimi Ismail turns 30 today and the father of two wants to mark the occasion with a win in the Malaysian Athletics Grand Prix at the National Sports Council (NSC) Training Track in Bukit Jalil this weekend.

Hakimi, who is from Perak, has not featured in any competition since he took gold in the Philippines SEA Games in 2019.

“The Malaysian GP will be the first competition for all national athletes this year and I will be more than happy to jump further than 15.80m to win the gold.

“I have a personal best of 16.77m but I am not expecting to do a good jump as I have not competed in any meet for the last 14 months.

“I am competing to regain my form and rhythm after no competitions for the whole of last year because of the Covid-19 pandemic, ” said Hakimi, who is coached by Firdaus Salim.

At the Philippines SEA Games, Hakimi leapt to 16.68m to take his third consecutive gold medal in triple jump.

“I have been training since January and need a competition to gauge my performance.

“My main challenge this year is to qualify for the Tokyo Olympics in July but it is going to be really tough to qualify.

A good performance in Bukit Jalil this weekend will also help him make his case to go to Europe to fight for his Olympic dream.

“Competing against the top athletes in Europe will definitely push me to break my personal best and also my national record to win a place in the Olympics.

“I’m still waiting for NSC to approve my trip to Europe after Hari Raya next month and I need to do a decent jump in the Malaysian GP to go to Europe.”

“If I get to go to Europe, I may be taking part in three to four competitions there.” 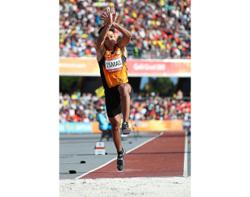