Chinese girls holding flowers, ribbons and flags were part of the 10,000-strong welcoming troop waiting at Beijing airport in 1974 to greet Malaysia's first delegation to China, which was led by Tun Abdul Razak Hussein. Photo provided by Chu Chee Chuan, one of 15 Malaysian journalists witnessing the establishment of Malaysia-China diplomatic ties. －Filepic/The Star

How does China eliminate poverty? This is one of the many questions that Malaysian friends from all walks of life often ask me ever since I assumed office as ambassador to Malaysia.

In February this year, Chinese President Xi Jinping declared that, on the occasion of the 100th anniversary of the founding of the Communist Party of China (CPC), through the joint efforts of the whole nation, China has eliminated extreme poverty. Recently, China released a white paper titled “Poverty Alleviation: China’s Experience and Contribution” to share its experience in poverty alleviation.

This has been a people-oriented battle. The 98.99 million people in rural areas who were living below the current poverty threshold all shook off poverty, while all 128,000 impoverished villages and 832 designated poor counties got rid of poverty, thus poverty over entire regions has been eliminated.

On average, more than 10 million people – equivalent to the population of a medium-sized country – have been lifted out of poverty annually over the past eight years. The assurances of adequate food and clothing, and guarantees of access to compulsory education, basic medical services, safe housing and safe drinking water for impoverished rural residents have been realised.

More than 20 million poor patients have been given treatment across different categories, nearly 20 million poor people enjoy subsistence allowances and special hardship assistance, and more than 24 million people with difficulties and severe disabilities have received living allowances and nursing subsidies. This is a great endeavour that will benefit future generations.

The pace of development in poverty-stricken areas has accelerated significantly. By the end of 2020, impoverished areas had gained 1.1 million kilometres of reconstructed highways and 35,000km of new railways. The reliability of power supply from rural power grids reached 99%; more than 98% of poor villages have access to optical fibre communications and 4G technology; distance education is available at more schools in impoverished areas; telemedicine and e-commerce have covered all poor counties.

The dilapidated homes of 7.9 million households and 25.68 million poor people have been renovated, a total of 35,000 centralised resettlement areas and 2.66 million resettlement houses have been built, and more than 9.6 million people from inhospitable areas have shaken off poverty through relocation.

This is a grand feat that benefits the world. Since reform and opening up, more than 770 million of China’s rural population living below the current poverty line have been raised out of poverty, accounting for more than 70% of the global total over the same period according to the World Bank’s international poverty line. Against the backdrop of the Covid-19 pandemic, China has achieved the poverty alleviation goal set by the United Nations 2030 Agenda for Sustainable Development 10 years ahead of schedule, bringing hope and inspiration to the world. As the largest developing country, China embarked on a road of poverty reduction with Chinese characteristics based on a realistic appraisal of the situation. This serves as reference for other developing countries to choose a suitable path of poverty alleviation.

There is a Chinese poem that goes, “Could I get mansions covering 10,000 miles? I’d house all poor people and make them beam with smiles.” Throughout history, eradicating poverty has been a tireless pursuit of the Chinese people. Today’s achievement has been a 1,000-year dream and a 100-year effort. In my opinion, China is able to achieve this miracle of poverty alleviation due to three “keys”.

First, a philosophy to serve the people wholeheartedly. President Xi said that the people's desire for a better life is the goal we strive to realise. Poverty alleviation is a great cause for the prosperity and happiness of the people. To realise the pledge of "no poor area or poor people must be left behind", a vast number of poverty alleviation cadres and grassroots officials took the lead in lifting the people out of poverty toward prosperity. There were 255,000 resident teams and more than three million officials dispatched as first secretaries and resident officials to poor villages, fighting on the front lines of poverty alleviation alongside nearly two million township officials and millions of village officials. They exchanged hard work and sacrifice for the happiness of the people.

The second key: the strength of institutions working in a coordinated fashion. China has planned and advanced poverty elimination under the CPC’s centralised and unified leadership. Leveraging the strength of its socialist system – the ability to pool resources for major endeavours – China mobilised forces from all quarters to participate in poverty alleviation. China established a poverty eradication management network with the central government acting as coordinator, provincial governments taking overall responsibility, and city and county governments overseeing implementation.

By practicing eastern-western collaboration, encouraging various industries to offer assistance, mobilising private enterprises and individual citizens to participate in poverty alleviation, etc, a framework with the full participation of multiple players from different regions, sectors, departments and businesses was established.

Encouraging the people to take charge of lifting themselves out of poverty through the transformation from "blood transfusion" poverty alleviation to "hematopoietic" assistance has also been effective in empowering the poor’s self-accumulation and self-development abilities, thus reducing the possibility of poverty relapse.

In today’s world, the issue of poverty remains a severe challenge, while poverty alleviation still remains an obstacle in global governance. In light of this, while the “China example” of poverty reduction comes with Chinese characteristics, it also carries global significance. China’s experience indicates that poverty is not predestined, nor is it unconquerable. China will continue working with the United Nations and developing countries on international poverty alleviation cooperation while also promoting high quality cooperation under the Belt and Road initiative for people around the world to share in the fruits of development, and jointly build a community of poverty alleviation and common development with a shared future for humankind. The road ahead is long; striving is the only way forward.

This year marks the beginning of China’s “14th Five Year Plan”. Meanwhile, Malaysia is currently in the process of formulating the 12th Malaysia Plan which will chart the course to economy recovery and revitalising the country. With highly complementary development demands, China and Malaysia are natural cooperative partners. China is willing to work together with Malaysia to face the risks and challenges, deepen exchanges and mutual learning, share development experience and economic benefits, and drive mutual benefits and friendly cooperation between both countries to new heights.

I believe that as long as we stay united and work diligently, we can create even more development miracles and build a better tomorrow together.

Ambassador of China to Malaysia 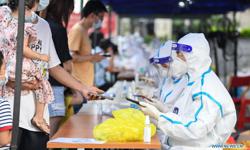 Employ precision public health measures
We need expert help
Why did this happen?
Better public service ICT needed
They’re people too, and should be afforded respect
Exit strategy: Building blocks for Malaysia (Part 2)
Refugees and asylum-seekers should be afforded respect and dignity
Refugee protection essential in Malaysia’s combat against Covid-19
Control of Covid-19 test price is only for laboratory cost under Emergency Ordinance
Never mind the detractors