How to reduce beef imports 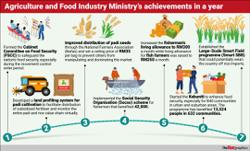 The motivation behind the National Agro-Food Policy 2.0 (NAP) is to reduce the country’s growing dependence on food imports and make agriculture a viable sustainable business through the use of IR4.0 technology. There have been a number of national agriculture policies before – unfortunately, not much was achieved under them.

It is now common knowledge that closing the food import gap, which runs into billions, remains unresolved. The sector that leads in shortages is beef and dairy products. Previous attempts by the government to produce beef locally fell short of expectations for one reason or another. One hopes an initiative in dairy by sovereign wealth fund Khazanah has a better outcome.

One major contributing factor to past failures in the beef and dairy sector, as discussed in various analyses, is poor management. We are not short of good ideas when it comes to planning. But somehow, when it comes to implementation, we continue to face problems. Some blame cronyism and nepotism, with projects handed to people who lack the necessary expertise and experience to deliver.

There was one idea mooted earlier by the nation’s livestock experts that has yet to take off: Using the nation’s vast oil palm areas to rear cattle for beef. Some entrepreneurial smallholders have done this and, according to reports, achieved some measure of success. The income from such ventures helps to tide them over times of low palm oil prices.

One plantation group attempted to rear sheep under oil palms. Referred to as “sheep labour”, the animals proved a big help in clearing weeds without the use of chemicals. However, uncontrolled theft led to the failure of the project and there has been no more interest in sheep after that.

Apparently, studies show that cattle are more adaptable to the oil palm environment than sheep. The NAP may want to relook this option.

There have been suggestions for agencies like Felda or Felcra to helm a national-level cattle-rearing project. It should be classified as a mega agriculture project, and therefore given the same strong support as mega projects such as the ECRL (East Coast Rail Link) and the like.

There must be a dedicated, well-funded entity to oversee the project, not just a department in Mafi. Regular progress reports should be mandatory, making the project transparent to the public.

Management issues have often derailed projects like this. There will also be strong challenges from existing players in the beef supply chain, so strategies will be needed to overcome such obstacles.

According to one study, the targeted self-sufficiency level of beef at 33% by 2020 would entail the annual slaughter of 0.7 million cattle. Independent smallholdings would struggle to deliver this with their low production inputs, lack of husbandry innovations and poor marketing network.

With six million hectares of oil palm, a sizeable population to deliver such a target is realistic in an integrated beef and palm oil production system. Products such as palm kernel cake and oil palm fronds have the potential to fully feed cattle.

That study has suggested that strengthening the value chain in everything from breeding stock use to marketing of animals and retail products is a much needed approach to promote and expand the beef industry in this country. The NAP 2.0 should seriously consider this.