The police used Section 430 of the Penal Code to extend the remand of the people suspected of polluting Sungai Gong in Selangor in September 2020. — CK LEE/China Press

I refer to the report “Sg Gong pollution: Remand of four factory managers extended by five days" (The Star, Sept 10, 2020). According to the report, the four were remanded for a further five days in accordance with section 430 of the Penal Code to enable further investigation into the water pollution incident that caused a supply disruption to millions in the Klang Valley.

Section 430 provides for an offence of mischief by causing a diminution in the supply of water for agricultural purposes, or for food or drink for human beings or for animals. It provides for a jail term of between five and 30 years or a fine, or both, upon conviction.

It is disconcerting that the police should resort to the Penal Code to arrest these suspects.

The Penal Code is the general law on crimes in Malaysia. It is based on the Indian Penal Code, which was enacted on Oct 6,1860; and that, in turn, is based on 19th century English criminal law. In other words, our Penal Code is a 160-year-old law come Oct 6. It is not surprising then that some of its provisions have been called antiquated or archaic, for example the provisions for sexual offences.

An offence under section 430 is a serious one which explains why the offender may be arrested without warrant and remanded for investigation under the Criminal Procedure Code. But surely the pollution of Sungai Gong is more than an act of mischief? It is called water pollution for obvious reasons. Does not the law provide for the offence of water pollution?

The short answer is “Yes”.

(a) with the intention to cause death;

(b) with the knowledge that he is likely to cause death; or

(c) which would likely endanger the life of any person,

commits an offence under section 121(1) of the Water Services Industry Act 2006 (Act 655). Upon conviction, the offender faces a death sentence or imprisonment of 20 years and whipping if not sentenced to death where death is the result of the offence. If the offence does not result in death but the contaminant is a radioactive or toxic substance, the offender faces a mandatory jail sentence of up to 10 years or a fine not exceeding RM500,000 or whipping, or all three. In any other case, the offence is punishable with a fine not exceeding RM100,000 or with imprisonment for a term not exceeding one year or both.

Clearly, water pollution or contamination is a very serious offence, even carrying a death penalty. Yet Act 655 does not provide for the power to arrest to aid investigation of offences under the Act.

And that’s perplexing, to say the least.

But since arrest is also a deprivation of personal liberty, it has to be in accordance with the law. Which is why it has to be provided for in Act 655, as well as in the main law on environmental protection, namely the Environmental Quality Act 1974 (Act 127).

By comparison, Singapore’s Environmental Protection and Management Act – the republic's primary legislation relating to environmental pollution control for the protection and management of the environment and resource conservation – provides for powers of arrest in the director-general, an authorised person or a police officer for offences under the Act.

Interestingly, the Lembaga Urus Air Selangor (LUAS) Enactment 1999, which is a state rather than federal law, empowers any officer authorised in writing by LUAS – including a police officer not below the rank of Inspector – to arrest, without warrant, any person found to be committing an offence under the Enactment (section 109). The Enactment has been much referred to in the pollution of Sungai Gong. Yet one wonders if the police are aware of the power to arrest under it.

Much has been said about the urgent need for vigorous enforcement of the law. I should add that it must be with the power to arrest. 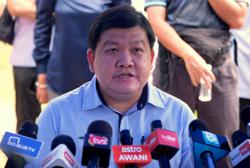