FOR many years now, we have been talking about generating economic benefits from the nation’s biomass. We have plenty of such materials in the form of the massive amounts of residue from oil palm such as empty fruit bunches (pic), increasing quantities of municipal solid wastes from towns and cities, and some under-used materials from the rubber, rice and fruits sectors, among others.

Much research has been done on biomass by universities and research institutes in the country, but so far nothing concrete has come out except for a few small demonstration projects here and there.

Many journal papers have been produced, however. These have at least helped with the ranking of the universities, but there’s nothing much to shout about in terms of building business from such materials, most of which are disposed as waste.

I recently attended the meeting of a newly-established network of what can be referred to as the nation’s biomass activists. They are professors and researchers from many of the nation’s universities as well as some business enthusiasts who have been actively exploring the potential economic opportunities offered by biomass.

There is no denying that a biomass-based industry would do much to support the nation’s GDP and employment. The professors at the meeting enlightened the group on how far they have reached in their research and development while the industry representatives shared some of the challenges they face in commercialising biomass.

From the discussions that ensued, it was obvious that there are still many issues which need to be sorted out before we can truly move towards building a biomass-based industry for the nation. The formation of the network is indeed timely. It can be an effective platform to communicate all concerns related to research funding and commercialisation to policy makers and potential investors in biomass in Malaysia.

All the research done so far shows that biomass could be an important resource for the nation. Many studies have demonstrated how they can be harnessed as a source of renewable energy for the country. There are also studies showing that many of the industrial chemicals sold in the market today can be produced from biomass, and some new ones as well.

If improperly disposed, biomass can be detrimental to the environment. Municipal solid wastes from towns and cities, for example, have become the subject of much debate on how best to manage them without negatively impacting on the environment. We are all too familiar with the overloaded landfills in the country. Some have even become a health hazard. Burning in landfills presents other air pollution problems. These include the emission of toxic gases such as dioxin and the like.

Research shows that landfill biomass can be harnessed as a resource. We are all aware that the open burning of biomass in Indonesia as well as in our own country is the root cause of the haze we regularly experience.

Why can’t we, together with Indonesia, create a socio-business system where instead of burning in the open, farmers would earn money selling the biomass to entrepreneurs who would economically harness it for the many values it offers? Why can’t the farmers be incentivised to then cultivate fast-growing energy crops to feed the new biomass business to earn better incomes? Many studies have shown that there are potential energy crops which are suitable for the tropical climate.

Biomass can be the start of a new industry, but we need clear directions to guide the necessary investments to build such an industry. I have been told by the network that much research has been done to demonstrate the potential economic value biomass offers. What we really need now is an action plan to realise the potential. 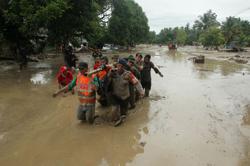 Indonesia produces maiden batch of biodiesel made of 100% palm oil