When Parliament amended the Islamic Family Law last Monday, many interpreted it to be a curtailment on polygamy. SUHAINI AZNAM reports.

IN pre-Islamic society, men who could afford it were taking 30 to 40 wives. Women were objects of barter.

But today, when most men marry just the one wife, the idea of a second or third marriage prods a hornets' nest. The number of second marriages was really a matter of perspective – whether the glass was half full or half empty.

“It is fairness that is the basis (of a happy home) and not the number of wives.”

Thus MPs debating the Islamic Family Law (Federal Territories) (Amendment) Bill 2005 equated it with polygamy, even when its main intention was merely to give first wives some degree of financial protection in the event their spouse remarried.

As anticipated, several male MPs rambled on about their rights in Islam, dwelling on the circumstances that would allow them to remarry.

Ampang MP Dr Rozaidah Talib, the lone Muslim woman MP to speak, took on the tack of a wife’s emotional torment and a husband’s responsibilities.

The initial reaction of assorted women's groups was to protest against the MPs' interpretation of the amendments as an “inconvenience” to masculine instincts, or what Tangga Batu MP Idris Haron termed their “3Ts - teringin tetapi takut” (would like to but scared).

No wife likes the idea of her husband taking on another as she is made to feel inadequate and is embarrassed before her peers, said Abdul Fatah Haron, MP for Rantau Panjang.

With the amendment, the court will not only decide on the man's financial and physical ability to support a second wife, as it already does today, but will also decide on the quantum of joint asset to be allocated to the first wife before he can remarry.

“Syariah law is a problem-solving mechanism, without having to wait until a man dies to disburse his property,” said Shabery.

With its passage, “a woman can sleep secure in the knowledge that she would not have to share the roof over her head, even if she will not sleep peacefully because her husband had taken another,” said Labuan MP Datuk Suhaili Abdul Rahman, who has two wives himself.

This was the fourth in a series of five syariah related bills to be tabled in Parliament, three having been passed in July. All but Terengganu, Kedah and Pahang have adopted it, while Perlis and Penang have yet to implement it.

The bill raised several pertinent issues, which in implementation will have to be resolved.

In wanting to avoid confrontation, the proposal that a man bring his first wife, his future intended and her guardian before the Syariah Court, “could push more men to keep mistresses,” thereby weakening society’s moral fibre, warned Ismail.

Jasin MP Datuk Mohd Said Yusof cited an article in which the Malaysian Consul General in Medan was quoted to have said that, “no less than 200 Malaysians applied to marry there each month.”

To remove this loophole, Suhaili proposed that instead of a fine, “those marriages contracted abroad be deemed illegal.”

Jurisdiction posed another question. Would it be applicable to foreigners? And what of Malaysians who lived in, say, Selangor but married in Perlis? When that marriage failed in Selangor, which court would oversee the division of assets – Selangor or Perlis? And if the couple refused to travel to Perlis, which state police would enforce the law?

Complications could also arise when a non-Muslim couple gets married in civil court. Should the husband subsequently convert to Islam and take a Muslim wife, will the first wife enjoy the benefit of these amendments?

In addition, while it is the Syariah Court judge who grants permission for a second marriage, if the disputed sum exceeds RM100,000, it goes to the Syariah High Court.

Enforcement is the biggest issue, not for lack of enforcement officers but because of their priorities, said Shabery.

“They are all too ready to raid entertainment outlets, check on artistes, and Muslims who commit khalwat (close proximity) or drink (liquor).

“But if a man fails to support his own children, after having divorced or deserted his wife, can the Syariah Court deal severely with him as would a civil court? Can he be made bankrupt? Can he be jailed?

“Muslims are obsessed with moral policing.”

As the House concurred that the courts have failed even today, Gombak MP Datuk Dr Rahman Ismail asked whether it would agree to set up a Nafkah (financial support) Enforcement Bureau as in other countries.

Interestingly, the two non-Muslims who spiritedly joined in the debate were both women, both from the DAP.

“It made the men uneasy,” said a smiling Seputeh MP Teresa Kok.

Her first complaint was of insufficient time given to MPs to study the bill. It had been introduced on Wednesday, debated on Thursday and passed the following Monday.

Minister in the Prime Minister’s Department Prof Datuk Dr Abdullah Md Zin, in winding up, had assured them that several NGOs had been consulted prior to its drafting. The DAP’s Fong Po Kuan of Batu Gajah wanted to know which these were.

When Dr Abdullah said only Muslim NGOs had been invited, both Fong and Kok leapt up in protest, saying that in future all women’s groups should be informed of any draft laws that had to do with women, as their constituents were Malaysian citizens, both Muslims and non-Muslims.

Fong also protested against women having to apply for their share of matrimonial assets, instead of the court allocating it to them as a matter of procedure.

A word of caution came from Datuk Mohamad Aziz of Sri Gading. “Don’t let us, especially the women, be influenced by the views of the NGOs which, in seeking equal rights, might have ideals contrary to Islam.”

“We all have daughters,” said Shabery, the father of two girls.

“I don’t want that one day, my daughters suffer because while I was a law-maker, I did not take care of their interests.” 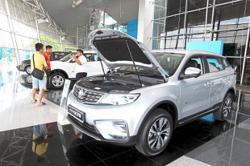