SOMETIME last year, I had a conversation with Professor Edmund Terence Gomez about the relationships between business and politics in Malaysia. That conversation evolved into an interest in looking at how our state-owned enterprises are governed.

Defining GLCs and GLICs is not very straightforward because they come in various forms and structures. At the risk of oversimplifying the situation, perhaps we can say that GLCs are companies owned by GLICs, who in turn are used by the Government to manage government investments.

I had a few more exchanges with Professor Gomez, in which he explained how the relationships have changed over time. After independence, foreign firms dominated the economy, but that era also saw the Government gradually increasing their intervention in the economy, including by starting some SOEs.

The 1969 riots escalated the intervention, especially following the affirmative action agenda of the New Economic Policy.

In the 1980s, the Government undertook corporatisation of several key entities. But the 1997 Asian currency crisis led to the nationalisation of some of the privatised entities and the re-emergence of GLCs as major players in our economy.

The 2008 global financial crisis caused people to debate the merits of state intervention in the economy, and Malaysia, too, was part of that global conversation.

However, throughout those periods, there was hardly any serious public conversation about how well our SOEs are governed.

In fact, even when Prime Minister Tun Abdullah Ahmad Badawi announced in 2004 his desire to improve the performance of our GLCs, not many people paid attention to it. The important work of the Putrajaya Committee on GLC High Performance that was formed in 2005, too, was not fully appreciated or even scrutinised by many.

When Prime Minister Datuk Seri Najib Tun Razak stepped into office in 2009, he introduced the New Economic Model. One major agenda was to reduce the Government’s role in business so that the private sector becomes our engine of growth. But this did not go very far. Until today, SOEs remain a dominant feature of our economy.

For most people, whenever the word SOE, GLIC or GLC is mentioned, the names that would usually come into their minds are Khazanah, Petronas, Employees Provident Fund (EPF) and perhaps a few others.

Not many people know about the company called Minister of Finance Incorporated (MOF Inc). Surely more needs to be known about the role of an entity bearing such a striking name, and if it is governed well.

This was why, after the various conversations with Professor Gomez, we commissioned him to study the topic further.

We also allocated money to fund Masters students to assist him. My original intention was just to get an essay, perhaps around 5,000 words, outlining the business-politics relationship in a broad sense, with the MOF Inc as a case study.

Little did I expect that the team would come up with so much data that it was not possible to put everything in just one essay. Instead, a lengthy and detailed new book was born.

The book, Minister of Finance Incorporated: Ownership and Control of Corporate Malaysia, launched on Aug 10 at University Malaya, analyses GLICs and their ownership and control of Bursa Malaysia’s top 100 publicly-listed enterprises. A special focus is given to the super-entity MOF Inc and how it dominates Malaysia’s corporate scene.

Using data up to 2013, the team found that, especially through MOF Inc, the Government’s involvement in the economy is really huge. At least 35 public-listed companies are linked to the Government, constituting an estimated 42% of the total market capitalisation of all listed companies in 2013. Through these 35 GLCs, ultimately the Government has connections with more than 68,000 other companies.

But the most remarkable one is the power of MOF Inc. There is a heavy concentration of political and economic power in the office of the Prime Minister, by virtue of him also being the Finance Minister, who in turn controls MOF Inc.

This control is a disincentive for separating the role of Prime Minister from Finance Minister.

There is a real issue here with regard to corporate governance, because power is too concentrated in one hand. We need to properly examine how to improve this situation. Our project with Professor Gomez continues and I am sure we will come out with more findings in the next stage of our project.

Wan Saiful Wan Jan is chief executive of the Institute for Democracy and Economic Affairs (www.ideas.org.my). The views expressed here are entirely the writer’s own. 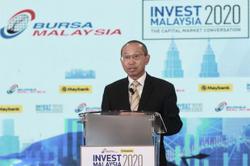 Need for PLCs to perform