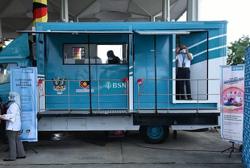 THE night Veveonah Mosibin spent on a tree to get better Internet access sparked a ferocious debate about the nation’s digital divide.

Her problem was proven real. It was not a publicity stunt by the 18-year-old student of Universiti Malaysia Sabah (UMS).

It also laid bare the hypocrisy of two deputy ministers, one unashamedly giving wrong information in the Dewan Negara, the other criticising Veveonah in his Facebook account.Veveonah is an unlikely game changer. She exposed one of the flaws in our digital adventure. She proves beyond reasonable doubt that the Internet has developed unevenly in Malaysia. There are many students like her desperately seeking better Internet access in rural areas.

The Covid-19 pandemic has exposed how vulnerable our students are when it comes to online home learning. We still have a problem in providing equal Internet access for both the urban and rural areas. At the same time, due to poverty or lack of awareness, at least 35% of our students do not have the proper tools or appliances to access knowledge digitally. Many do not have adequate home Internet for remote learning.

According to the Department of Statistics, household Internet penetration in Malaysia has increased to 90.1% this year.

There are currently 26.6 million Internet users in the country as of January 2020. There are also 26 million social media users, placing us as one of the heaviest users of social media in the world.

But households with access to computers stand at 71.3% while individuals with computers is 72%.

Veveonah’s plight is just part of a bigger narrative. The press has been highlighting stories of rural schools with poor Internet connections.

The one about Sekolah Kebangsaan Linungkuan Tenghilan, in Sabah’s Tuaran District, would have been forgotten had the Veveonah case not been highlighted. The complaints about “weak connectivity” in many rural schools in the country have been heard for a long time. Despite accusations against the initial contractor for providing less than satisfactory Internet connectivity, very little has been done to correct that. Uneven Internet leads to uneven learning experiences and jeopardises the virtual learning environment we need to create.The Internet situation in the country is somewhat likened to Antara Dua Darjat, the classic 1960 film directed by the legendary P. Ramlee who was also one of the main characters. The title is loosely translated as “between two classes”, a story of two lovers divided by their economic standing.

The Internet is about two poles standing apart – one talking about state-of-the art, robust and high-quality connectivity, the other about uneven, unreliable and unstable connectivity. The former is pursuing faster broadband speeds and gigabits availability in future, and to provide an ecosystem to support 5G services. The latter, sadly, is demonstrated by the case of Sekolah Kebangsaan Linungkuan Tenghilan and the story of Veveonah and her tree adventure.

When the government mooted the idea of the Multimedia Super Corridor (MSC) back in the 90s, it was to catapult Malaysia from the Industrial Age to an Information Age. The dynamics of information technology has changed dramatically in the last 25 years but the spirit of creating outstanding information infrastructure and high-technology creativity is still intact.

The Pakatan Harapan government in August 2019 announced a RM21.6bil national connectivity plan to address the digital divide. It was announced by then minister of communication and multimedia Gobind Deo. The five-year National Fiberisation and Connectivity Plan (NFCP) is supposed to benefit everyone to participate in the digital economy.

According to Gobind, NFCP will enhance the economic competitiveness of the country and the people in this digital era. He was hoping that through the initiative, the living standards of the people will be improved and new businesses will be developed.

We are not sure what has happened to the NFCP with the change of government early this year. Continuity is never our strong point, however beneficial or practical the initiative by the previous administration, more so how the previous government was.

The good news is the current government is taking notice of the commotion created by Veveonah. Science, Technology and Innovation Minister Khairy Jamaluddin tweeted on Sept 9 that “the Cabinet agreed that the real issue is Internet connectivity and basic infrastructure particularly in rural areas. The government is trying its best to fix them.”

Let us hope something good will come out from this episode.