DURING my two-week trip to Indonesia, I observed there was a serious discussion about ekonomi koronavirus (literally coronavirus economy). The debate was on the impact of the outbreak, particularly to Indonesia. Ironically, as of last Thursday, there was no case of the disease among its populace or reports of foreigners contacting the disease.

Bear in mind, Indonesians living in Wuhan, the epicentre of the outbreak, were brought home beginning Feb 1.

According to them, Indonesia should have reported Covid-19 (novel coronavirus) cases. They believe that there are undetected cases in the country. Considering its extensive air links with China and the city of Wuhan, there must be cases of Indonesians affected.

Indonesia’s Health Minister Terawan Agus Putranto did not mince words when he reacted to the study.

He found it insulting that Harvard researchers are insinuating that Indonesia probably does not have the proper testing equipment.

“They can be baffled but it’s a fact, ” he told reporters.

The World Health Organisation (WHO) has recently raised concerns about high-risk countries “with weaker health systems” in monitoring or managing the impeding crisis.

But Covid-19 is not sparing rich nations and ravaging poor nations as the reality of the cases show.

And Indonesia has a history of avoiding the Zika outbreak while devastated by the avian flu cases earlier.

Indonesia with a population of 260 million is one of the few countries spared from the outbreak, at least so far. Even Scandinavian countries have reported cases of those

According to figures released by WHO (as of Friday), Singapore has 58 cases, Thailand 33, Malaysia 19, Vietnam 16, the Philippines three and Cambodia one.

Indonesia certainly has been taking extra precaution, which is understandable.

Every passenger at its international airports has to fill in the tedious Kartu Kewaspadaan Kesihatan (health alert card) on arrival.

Indonesia is one of the first countries in the region that shut down all flights to and from mainland China in response to the outbreak.

They understand the impact of such a decision. In a good year it welcomes at least two million tourists from China.

The debate is not just about a short-term implication but the impact to global economy in the near future.

You don’t need to be an economist to understand that the Covid-19 outbreak is deadlier than the SARS scourge.

When it hit China, the ripples went far beyond its shores.

China contributed to at least 14% of the global GDP.

SARS affected slightly more than 8,000 people and killed 774 before it fizzled out.

The Covid-19 outbreak is, worryingly, still at an early stage.

The worse has yet to come.

Analysts are looking at possible economic losses equal to nearly 5% of the global GDP.

We are talking about a staggering RM12.42 trillion.

China is Indonesia’s biggest trading partner. Its exports three times more goods to China in comparison with Malaysia and imports 5.6 times more goods from China than from us. Despite the fact that it had a chequered history with China and is still having territorial disputes over South China Sea, Indonesia has taken a very pragmatic approach for China is an indispensable part of Indonesia’s economy.

Indonesia is fearless in protecting its shores and its people.

I was watching an interesting discussion on Indonesian TV about the current and future level of disruption of the global supply chain as the result of the outbreak.

Globalisation has its downside when it comes to an epidemic like this one. Productions will be slashed and factories will remain closed in many areas.

One of the panellists mentioned that Wuhan is no ordinary city.

The city of 11 million people is also an important industrial centre.

Imagine the impact on at least one industry – car manufacturing.

Perhaps we can learn a thing or two from the Indonesians.

Perhaps their Reformasi movement, which is 23 years old now, has borne its fruits.

It is more about pengisian (the substance) rather merely politicking. Our experiment with “Malaysia Baru” is less than three years.

So, while the Indonesians are debating on how the outbreak will affect their economy, we are making it almost a national obsession talking about political realignment, vote of confidence or otherwise, a new coalition in Pakatan Harapan and when the current prime minister will relinquish his position.

Luckily for Indonesia, they have decided to move on.

Johan Jaaffar was a journalist, editor and for some years chairman of a media company, and is passionate about all things literature and the arts. And a die-hard rugby fan. The views expressed here are entirely his own. 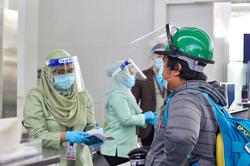