Constitution – the litmus test of validity FORMER Chief Justice Tun Fairuz Sheikh Abdul Halim is reported to have stated at a forum that “Islamic law takes precedence over civil legislation in Malaysia”.

According to him, “just like laws that contradicted the Federal Constitution would be void, those that went against Islamic law’s main sources – the Quran and Sunnah – would also be void”.

Most respectfully this remarkable, revolutionary view of our legal system has no basis in the constitutional, legal, political, social, economic and historical reality of post-Merdeka Malaya and especially post-1963 Malaysia. Sabah and Sarawak will be alarmed by this view. If these thoughts were merely a prayer and an aspiration, that would be legitimate but then Tun Fairuz should have said that he was expressing a personal vision of what ought to be, not what is. His speech is likely to confuse many students of constitutional law.

Article 3(1): The ex-CJ based his thesis on Article 3(1) that “Islam is the religion of the Federation”. This provision does indeed give to Islam a special, exalted position over all other religions in the country. But it does not signify that Malaysia is an Islamic theocracy or an “Islamic state”.

Definition of law: The concept of law in Malaysia is defined by the Federal Constitution in a very secular way. Under Article 4(1), “this Constitution is the supreme law of the Federation”. In addition, Article 160(2) defines law to include written law, the common law and any custom or usage having the force of law. Religious laws including the syariah, rules of ethics, morality and international law are not included in our constitutional definition of law. They can become law only if given the kiss of life by federal or state legislation.

Meaning of Islam: In the landmark case of Che Omar Che Soh v PP (1988), a drug law was challenged as un-Islamic and therefore unconstitutional. A five-member unanimous Supreme Court Bench held that though Islam is a complete way of life, the Founding Fathers intended to give the concept of Islam in Article 3 a limited meaning. There was no intention to refer to Islamic substantive law but to Islam only for ritualistic and ceremonial purposes.

Even if the impugned drug law was inconsistent with Islamic provisions, its validity cannot be challenged as it was enacted under the authority of the supreme Constitution. As things stand, the litmus test of a law’s validity is the Constitution and not the precepts of Islam.

In other decided cases, too, the concept of Islam has been defined narrowly. In Hjh Halimatussaadiah Kamaruddin v PSC (1994), a government clerk who insisted on wearing purdah to work was sacked and her argument that purdah was part of her freedom of religion was rejected.

In Meor Atiqulrahman Ishak v Fatimah binti Sihi (2006) three schoolboys defied school regulations relating to school uniforms and insisted on wearing turbans. They were dismissed despite their argument that turbans were part of the prophetic tradition.

Federal-state division: Tun Fairuz’s view is quite destructive of the federal-state division of powers in Schedule 9. Islamic law applies only in relation to 23 or so specified topics in List II para 1 (most of which are matters of personal law). And that, too, not automatically. Islamic law has to be legislated by the states. That is why there are 14 separate sets of syariah legislation.

Outside of these 23 areas, the rest of our personal, political, social and economic life is subject to democratically enacted laws, the litmus test of whose validity is the federal and state Constitutions. Take, for example, our Penal Code. Section 312 on “causing miscarriage” permits abortion in some circumstances. No court has declared that the law is null and void because it may be un-Islamic.

Federal laws on banking, trade, commerce, share markets, futures trading, gambling, betting, intoxicants, land matters and evidence may have many un-Islamic features. Citizenship and immigration laws do not grant rights to everyone in the ummah (the universal Muslim community) and yet no court has declared these laws null and void.

Tun Fairuz’s assertion that Islamic law takes precedence over civil legislation is not borne out by any clear examples in 60 years where a federal or state legislation was consigned to the dustbin of history because it violated Islamic scriptures.

Adat: In some states, adat applies in some fields and overrides what Tun Fairuz calls the “second most supreme” law.

This is quite a concession but is still problematic. If a piece of civil or criminal legislation is authorised by the Constitution and is within the permitted four corners, then it is valid irrespective of its non-compliance with the “second most supreme” law.

It is much neater to have a single grundnorm (basic rule) and not to try to invent a second grundnorm whose inevitable clash with the supreme Constitution, legislation, custom (adat) and common law will not be easy to resolve.

Non-Muslims: The idea that the syariah overrides all civil laws runs contrary to our “social contract”. Non-Muslims have a legitimate expectation that the laws that govern them shall not be overridden by the religious precepts of the majority Muslim community.

The proposal for this kind of imposition can ricochet around the world and adversely affect Muslim minorities in non-Muslim lands.

It has no correspondence with legal or social reality. Whether the Constitution should be amended drastically to make this a possibility requires the most painstaking investigation involving all stakeholders. 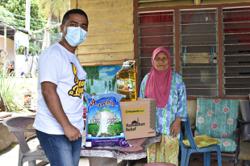 Where charity meets opportunity
Endgame still out of sight
The bane of modern gadgets
Ways to control circumcision pain Premium
Who would get your ‘unpopular’ vote?
Work together to stop fourth wave
Running on faith
To achieving national unity
DAP’s dilemma - Chinese first or Malaysian first? Premium
Malaysia at Covid-19 crossroads