THE making, amending or repealing of a law is Parliament’s primary function. Whether it is an ordinary Act of Parliament (like the Road Traffic Act), or a law to combat subversion or emergency, or a constitutional amendment, the legislative proposal must go through the fires of scrutiny in both Houses of Parliament.

Subsidiary legislation: Regret­tably, the above theory does not apply to delegated (or subsidiary) legislation, which is made by persons or authorities outside of Parliament on the explicit authority of a parliamentary statute (the parent law).

In fact, for every one statute passed by Parliament, there are on average 15 to 20 pieces of subsidiary regulations framed by the executive under the authority of that statute.

This shocking state of affairs has adverse implications for representative democracy and the doctrine of separation of powers. The executive enacts far more laws than Parliament.

The centre of gravity of the legislative process has shifted away from Parliament towards the unelected bureaucracy.

Something needs to be done to assert a semblance of parliamentary control over the subsidiary legislative processes. In administrative rule making, the executive acts as the agent or delegate of Parliament and therefore the legislature must ensure that there is no abuse of delegated power.

Modalities of control: The following procedures and institutions exist in democracies to supervise and regulate the executive in its extended law-making role:

Consultation: In an effort to “democratise” the making of subsidiary legislation, Parliament may adopt a number of techniques. It may mandate prior consultation with named interests, NGOs or representative groups.

Or it could recommend consultation with such persons as the delegate may deem necessary. Or it could delegate rule making power to an institution that is representative of the affected interests.

For example, section 43 of the Dental Act authorises the Dental Council where dental surgeons are represented to make regulations.

Generally, mandatory consultation is not prescribed in Malaysia though it is so under the Federal Administrative Procedure Act in the USA.

In the United Kingdom, the concept of “legitimate expectation” is emerging to require consultation with all who will be affected by the regulation.

Laying procedures: As subsidiary legislation is framed outside of Parliament, MPs have no opportunity to scrutinise the draft legislation and give their input. For this reason, laying procedures are often written into the parent law. The purpose is to submit (or lay) the instrument before the Houses for the information of MPs.

There are five types of laying procedures. In terms of effectiveness, the greatest opportunity for parliamentary scrutiny is “laying in draft subject to affirmative resolution”. The subsidiary regulation is framed but not yet enforced.

A draft is laid before Parliament and is subject to parliamentary approval or disapproval within a stipulated period. If approval is not obtained, the instrument is killed.

Second, “laying subject to affirmative resolution”. The subsidiary rules are made and enforced but as a condition of their continuation they must be debated and approved in Parliament within 40 days of laying. Failure to debate and approve will annul the rules.

Third, “laying subject to negative resolution”. The instrument is made and laid and either House may within 40 days annul it. But if there is no resolution to annul, then silence is deemed consent.

Fourth, a greater degree of control than the third technique is that the instrument is “laid in draft subject to negative resolution”. The instrument is not yet law. Its draft may be rejected by either House within 40 days. But silence is deemed consent.

Fifth, “laying simpliciter” whereby once the regulation is made it is sent to Parliament for the information of Members of Parliament. Nothing more is required.

Laying procedures, especially the affirmative resolution procedures, are uncommon in Malaysia due to paucity of parliamentary time.

Scrutiny committees: The Standing Orders of each House permit the Houses to set up Select Committees to investigate and oversee any activity in relation to which the Houses wish to act as the grand inquest of the nation.

It will be an advance for our parliamentary democracy if each House of Parliament (or the two Houses jointly) were to set up a Parliamentary Scrutiny Committee on Subsidiary Legislation to watch over the exercise of subordinate law making by the omnipotent executive.

We can emulate the example of the Joint Committee (of both Houses) on Statutory Instruments in the United Kingdom or the example of India where there are separate House Committees on Subordinate Legislation.

The bipartisan committee(s) consider every instrument laid before Parliament and determine whether the attention of the Houses should be drawn to the content or process of the subsidiary law.

For example, if a regulation is backdated, or seeks to exclude judicial review or goes beyond the power conferred, the Committee can alert Parliament. A conscientious MP may then introduce a motion to annul.

Publication: In Malaysia, a subsidiary law can be enforced prior to publication! Much depends on whether the enabling Act mandates Gazette publication.

To mitigate the harshness of the law, section 20 of the Interpretation Acts (1948 and 1967) says that no criminal penalty may be imposed if the subsidiary legislation was not published on the date the offence was committed. However, civil liability may lie!

In sum, subsidiary legislation is an unavoidable and mammoth phenomenon. It challenges the primacy of parliament. It is undemocratic.

It impinges on human rights. It is largely going uncontrolled.

For this reason all Acts of Parliament delegating legislative power, must provide consultative and laying procedures.

Further, a Joint Select Committee of our two Houses must be established to scrutinise subsidiary legislation to assert Parliament’s pre-eminence in the legislative sphere.

Rule on wearing masks should be made clear 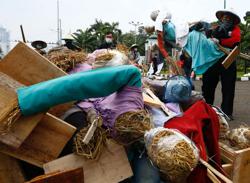