WHEN Ryverra Wiviani Rinus googled "digital divide" using her mother's phone in their home at Kampung Bomboi in Keningau, Sabah, she couldn't download a page.

"Confirm I can't open Google as the Internet connection in my house is like a snail," said the 15-year-old Kadazandusun student from SMK Keningau.

To get a better Internet connection, Ryverra Wiviani's five-year-old brother Reyxxter Wivincearthur would put a wifi modem into a plastic bottle and pull it upward to the roof. With the innovation, it would take about one minute to perform a Google search via 3G connection.

But the speed was not fast enough for the six siblings, aged between five and 17, to do e-learning during the movement control order (MCO).

To access 4G connection in late April, their 36-year-old uncle Nick built a wooden makeshift "classroom'' at the edge of their village, about 8km from Keningau town.

The siblings have to walk about 600m from their home through the jungle to reach the hut which they called Puru Online (Puru in Kadazandusun means "jungle").

The six siblings have to share their mother's phone and an outdated laptop for e-learning. 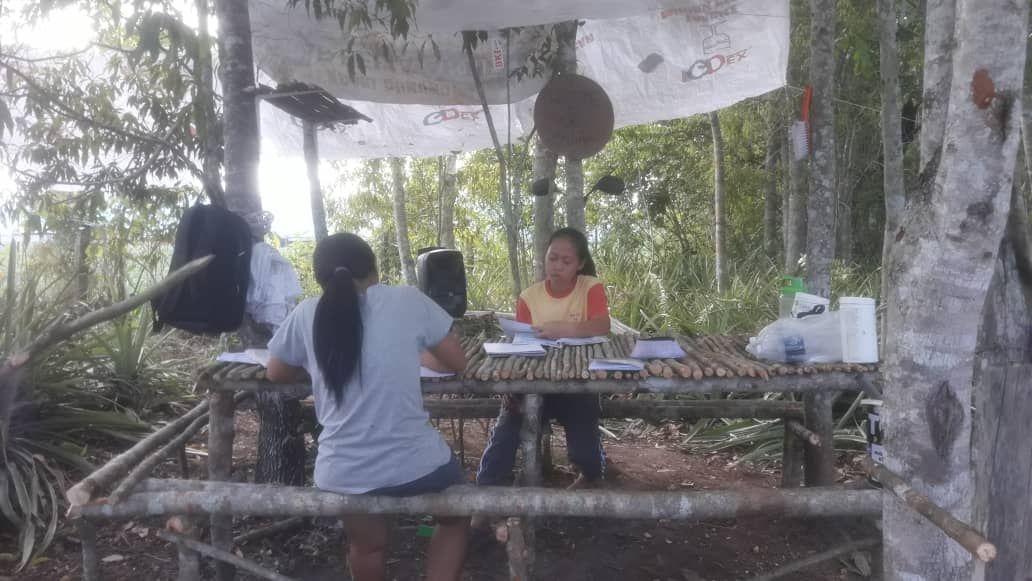 "It depends on luck who holds the phone first. That person is lucky as she can use the phone first until she is finished with her homework. That also depends on whether she has a lot of homework to do," Ryverra Wiviani said.

"But my elder sister has the clout among us, so it is easy for her to take the phone while we are using it."

The siblings, whose 45-year-old dad is a pre-school teacher and 39-year-old mother is a rubber tapper, also have to manage the free daily 1GB Internet data.

"If we are thrifty in using the Internet, 1GB is enough. But that would mean that many homework assignments," said the Form Three student, adding that they need about 3GB to 4GB a day for e-learning.

Studying online, according to her, would be less frustrating and more rewarding if the Internet connection was as fast as lightning.

Welcome to the digital divide in Malaysia.

If Ryverra Wiviani googled "digital divide", she would get: "the gulf between those who have ready access to computers and the Internet, and those who do not."

The online teaching and learning method during the time of Covid-19 have highlighted the digital gulf in Malaysia.

The internet speed for students from a middle-class family in Kuala Lumpur is as fast as lightning. Most own a tablet or/and a smartphone.

Their First World problem is whether they should switch on the air-conditioner in their room during e-learning. In contrast, students like Ryverra Wiviani have to worry whether the plastic sacks in the makeshift classroom will provide enough shelter from the blazing sun.

To help students like Ryverra Wiviani plug the digital divide, Beyond Pitas (a group that highlights the plight of the underprivileged) and social activists like Angie Chin-Tan have kickstarted a crowdfunding campaign.

"It is depressing to learn how backwards we are still in terms of access to technology. I cannot imagine how unfair it is for these kids to be deprived of access to education just because they have no access to the Internet and cannot afford the proper gadgets to access knowledge," Chin-Tan said.

"In fact, in this age and time, no children should be left behind when it comes to access to knowledge."

Chin-Tan believes the campaign would have a positive impact.

"There are more affected students out there that are waiting to get help. And by kickstarting this campaign, we hope to create awareness of #DigitalForAll and #DigitalUntukSemua to address this digital divide," she said.

For those who wish to support the campaign, they can go to https://bit.ly/2NmFBnK or email to hello@hanafundme.com.

It shows Puru Online which is a wooden hut covered with plastic sacks to protect them from the sun, rain and animals that may fall from the trees. They also have a portable cooking stove to cook a simple meal. They even burn egg cartons to keep mosquitoes away.

Ryverra Wiviani prefers to be back in school. She doesn't want her education to be hampered by Internet speed that can be as slow as a snail.

Many students in Malaysia face the same plight as the siblings from Keningau. We need to bridge the digital divide.