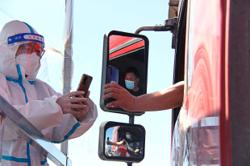 Quiet street: Xi’an has been placed under a lockdown since Dec 23, following a serious outbreak with over 2,000 cases. — Xinhua

CASES of deaths due to delayed treatment have led the Chinese to question the rigid behaviour of hospital staff in following the standard operating procedure (SOP) in the control and prevention of Covid-19.

At least three lives – two unborn babies and an adult – were lost at separate hospitals in Xi’an of Shaanxi province recently.

The city of 13 million people has been placed under a lockdown since Dec 23, following a serious outbreak with over 2,000 cases from early December.

The Chinese government is on alert to contain Covid-19 cases with the Beijing Winter Olympics 2022 starting on Feb 4.

The first tragedy happened on New Year’s day when an eight-month pregnant woman was refused entry to a hospital in Xi’an city.

It was reported that the mother-to-be was suffering abdominal pain at around 7.30pm.

The family immediately called an ambulance but could not get through as the line was busy.

Left with no other choice, they contacted the police who sent her to Xi’an Gaoxin Hospital an hour later.

The woman was turned away at the doorstep simply because her nucleic acid test expired. She needed to present a negative result for a test conducted within 48 hours, but hers had expired, just hours before she arrived.

Unable to enter, the woman waited in the cold while her husband pleaded with the staff.

She began bleeding on the sidewalk and was allowed in for a caesarean operation two hours later. Unfortunately, the baby had died.

The nucleic acid test can only be done at designated hospitals or laboratories.

Apart from hospital admission, a valid nucleic acid test result is commonly required for attending functions or inter-city travel, among others.

Such a requirement is adjusted from time to time according to the pandemic situation.

On Jan 2, a 61-year-old man was rushed to Xi’an International Medical Centre Hospital with chest pains.

He was denied medical care on arrival because he lived in a medium-risk area and did not have a valid nucleic acid test certificate.

The man did the test but the result would only be available six hours later, at the earliest.

His daughter took him to several hospitals but all refused to admit him for various reasons.

After more than eight hours, he returned to the first hospital he sought help and underwent a surgery but it was too late, he died a few hours later.

These incidents have shocked the public, who called on medical institutions to adapt flexible SOP in treating those with critical conditions.

“Your duty is to save lives, not kill,” wrote angry netizens, who felt that adhering to the SOP was important but the measures could be relaxed on a case-to-case basis.

While all this uproar was taking place, a 28-year-old woman revealed that she faced the same dilemma while seeking medical attention on Dec 29.

She, too, had a miscarriage due to delayed treatment.

“If I shared my unfortunate experience, there might not be another victim,” she said.

The woman, who was six-week pregnant, was turned away by two hospitals where she sought help for abdominal pain.

After numerous calls to other hospitals and with help from the police, they finally found one that agreed to take her in.

On the way there, she started to bleed.

Analysts said the deaths were caused by “bureaucratic delays”.

“The local medical staff failed to assume their responsibility and save lives. Instead, they chose to rigidly enforce the rules of their superiors,” they told The Global Times.

Since lockdown, there have been chaos and complaints about Xi’an’s poor management and coordination of the anti-epidemic works, with residents facing difficulties in buying food and seeking medical treatment.

The city government has ordered hospitals to open up green lanes for those with critical illnesses and special conditions such as pregnant women, newborns and children as well as haemodialysis and cancer patients who needed regular follow-ups.

Some cities have taken similar actions.

Meanwhile, Xi’an Gaoxin Hospital and Xi’an International Medical Center Hospital have been ordered to suspend operations for three months to rectify and improve their shortfalls.

Both hospitals are under Xi’an International Medical Investment Co, whose share price fell by 8% at one point and closed with a drop of 4.81% at 10.28 yuan (RM6.75) at the Shenzhen Stock Exchange two days after the incidents were exposed.

The market value of the company was reported to have shrunk by 3.3 billion yuan (RM2.2bil) in two days.

Several senior executives from the two institutions have also been removed or penalised.

Netizens, however, were not satisfied.

They demanded that punishment be taken against the other hospitals which refused to treat the three victims.