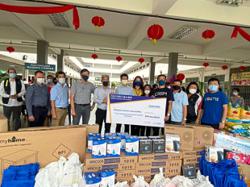 DREAM House, a popular home makeover television programme that has been on air for eight seasons, came under fire following the creation of an “ugly red brick house”. The house, which took renowned architect Tao Lei six months to complete, has been labelled as the worst in the history of the long running series.

Many viewers complained on social media, criticising the architecture design and worse, they felt that it was overpriced.

The original home, a typical farm house built on land the size of one-quarter of a football field, has four bedrooms, two storerooms, a kitchen-cum-activity area, a toilet and a chicken coop.

“My father constructed the main structure 40 years ago and I slowly expanded it over the years,” said Du, 68, in the show.

He lives there with his wife He Lan while their five children have settled down in various cities.

The couple visited the cities but could not adapt to the environment and returned to the village of just 4,000 people.

“Life is tough and not as convenient here, but one should not complain much about his own hometown.

“I was born here, I treasure this place I call home,” said Du.

His home is located on the Loess Plateau of dry desert hills and is hit by raging sandstorms and frigid cold winters with an average yearly temperature of between six and nine degree Celsius.

Du had wished to rebuild a comfortable home for his family of 20 when his children and grandchildren return for the holidays.

“Maybe one day, after they have retired, they may want to come back here,” he told the show’s production team, which then engaged Tao for the task.

He wanted a two-storey modern Western-style villa, similar to his neighbours.

Upon inspecting the area, Tao – who also teaches at his alma mater the Central Academy of Fine Arts – said that he could fulfil Du’s wish.

But he opined that a single-storey home was good enough for Du.

“He has the land area and living on the upper floor is actually not so convenient, I will try to make him understand but if he insists, I will respect him,” said Tao.

Du stuck to his original idea of wanting a two-storey villa.

After months of working on the design, sourcing for materials and craftsmen, he came up with a single-storey home, stacked with just bricks, and on the upper floor, there was only the master bedroom built. This, according to Tao, was to control cost.

The construction cost went beyond the budget as the price for building materials had spiked due to the Covid-19 pandemic.

The new flat-rooftop courtyard house has six bedrooms, three bathrooms, a kitchen, a dining hall, a living hall, a granary and a storeroom.

Accompanied by his family members, Du returned to his new home on Nov 17.

He appeared surprised and happy and said the house was very comfortable as he toured it.

“Better than what I expected,” he shared, as the camera crew followed him around.

There were no complaints heard throughout the one-hour and 20-minute programme.

But the audience had a different view after the episode was aired on Nov 19.

They took to social media, “demanding justice” for Du while complaining of the high construction fee.

They claimed the building cost, mainly absorbed by the owner, is equivalent to the price of a courtyard villa in some cities.

Netizens have called for the show to refund Du, saying his hard earned money should not be wasted on a rough brick house.

When asked by the local media, a neighbour of Du laughed that the “artistic home” was not even on par with his rural house which he built with just 50,000 yuan (RM33,200).

The TV producer apologised and explained that the house was incomplete due to the epidemic flare-up and low temperatures in the area, Global Times reported.

“The project will continue next spring and the producer will split the cost with the house owner,” it said.

Tao, in responding to the controversy, explained that the design was done following continuous discussions with the owner throughout the process.

Dream House which debuted in 2014, features a list of architects remodelling or rebuilding homes and buildings upon the audience’s requests.

Meanwhile, Tao’s home in a posh housing estate in Shunyi district of Beijing has been suspected of illegal expansion.

A team from the respective urban management bureau is investigating the allegation.

Sharing the good fortune of fertility
Bringing it on in Johor
Spike in tall tales
Protect our children with vaccination
Stop suppressing our best athletes
Is the Johor election slated for March? Premium
When the public came knocking at media office
Still not ready for an electrifying ride
When academics are ‘ignorant’
Learning by doing: Belt and Road FDI spillovers