Another dose of bad medicine

RABIES is one of China’s most se­­rious infectious diseases.

The country used to have the se­cond highest number of reported rabies cases in the world, after India, with thousands of deaths reported annually since the 1980s.

It managed to bring the situation under control early in the millen­nium following the implementation of several policies including the re­­mo­val of stray dogs from the streets.

However, the incidence of the disease has seen a slight increase in recent years, with more and more people keeping dogs as pets. Last year, a total of 502 rabies cases were reported nationwide.

Rabies is an infectious viral di­sease with a fatality rate of nearly 100% if not properly treated. Dogs are the main source, contributing over 99% of rabies transmissions to humans through bites or scratches.

Recently, a vaccine scandal has shaken the country. On July 15, the National Drug Administration announced that a vaccine producer in the northeast Jilin province was found to have violated the stan­dards for producing rabies vaccines for human use.

This was uncovered after the administration received a tip-off and conducted a spot check.

Although the affected batch of rabies vaccine had not been put on the market, the company – the se­­cond largest rabies vaccine maker in China – has been ordered to halt production and immediately recall all of its vaccine.

So far, 15 people, including the chief executive officer and other high-ranking executives, have been detained over the scandal.

The incident has sparked outrage among the Chinese, with both officials and the public slamming the company and calling for a full investigation.

Chinese President Xi Jinping and Premier Li Keqiang have demanded a thorough investigation and called for severe punishment for those responsible as such misconduct has crossed the moral red line.

The issue was also a daily topic among the Chinese and dominated social networking sites over the past two weeks with parents worried whether their children had taken the problematic drugs.

Many parents have turned to so­cial media sites for help, asking for ways to check whether the vaccines given to their children were safe.

Food and drug safety is a big issue in China. There are frequent reports on tainted food and pharmaceutical products.

In response, the public have vented their anger online, saying they have lost confidence in locally produced items.

Zheng Dongyi of the vaccine department at First Hospital of Tsinghua University said a person should get five doses of rabies vaccine, with one dose injected right away and additional doses on the third, seventh, 24th and 28th days.

“It’s okay to substitute doses from different producers if the vaccines are of the same type. Ideally, we suggest using vaccines produced by one company during the course of treatment,” Zheng told China Daily.

This is not the first time that the Changchun-based company and its subsidiaries are embroiled in a drug safety scandal, according to the dailies .

Last year, a batch of over 650,000 doses of DTaP vaccine for children against diphtheria, tetanus and acel­­lular pertussis (whooping cough) was found to have failed to conform to standards for biological potency.

In this case, 252,600 doses of vaccine had been sold to disease control and prevention centres through­out the eastern Shandong province and another 400,520 doses to Hebei province and Chongqing.

Dr Hu Rongliang, an expert in the rabies virus, said it was not common among the Chinese to vaccinate their pets.

He said the country did not have statistics on the number of pet dogs but the figure was estimated to be between 80 million and 130 million. Only about 30 million have been vaccinated as it is not a compulsory practice, he told the Daily Business News.

“Rabies control could be better if owners understand the importance of vaccinating their pets,” he pointed out.

The World Health Organisation (WHO) has noted that the regulatory control of vaccines was critically important.

“It is the government’s primary method of ensuring that the vaccines produced and used in China are safe, of good quality and effective,” its representative for China, Gauden Galea, said in a statement.

The organisation has offered to support vaccine manufacturers in China to ensure they comply with international standards and meet the pre-qualification expectations. 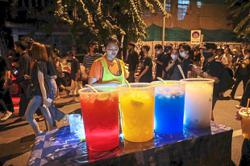