Saharah, who is a Maranao Muslim, owns a jewellery shop in Manila.

WHATEVER you call it: Eid al-Fitr, Hari Raya Aidilfitri or Idul Fitri (or more simply, “Lebaran”), the end of the Ramadan fasting month is a major holiday for both Malaysians and Indonesians.

This is unsurprising when you consider that 61% and 87% of our respective populations are Muslim.

Both our capital cities – Kuala Lumpur and Jakarta – experience a huge exodus of people as millions head back to their “kampung”, or hometown. Indeed, it’s estimated that some 15 million people leave Jakarta in the weeks leading up to Lebaran – returning a few weeks later, in ever greater numbers.

I divide my time between the two capitals and it’s clear enough to me that Islam is practised in both with enormous public respect and solicitude, regardless of what some may say.

Indeed, there are Muslims who for some reason feel our two countries are insufficiently Islamic and that their faith is imperilled. Personally, I find this argument quite bizarre. It’s clear, especially during Ramadan, that the daily life and rhythms of our two nations are determined by the dictates of the Ummah, who constitute the overwhelming majority of our populations.

Sadly, this sense of anxiety is being deliberately ramped up by those who should know better. 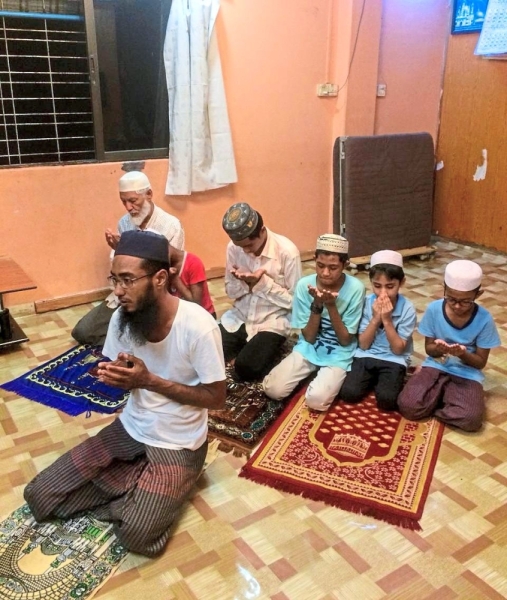 U Tin Win performing prayers with his children and grandchildren at his home.

What’s even more sad is that much of the suspicion and hostility is often directed towards our fellow, non-Muslim citizens.

The fasting month – and Eid – ought to also be a time of introspection for us. It’s a time to reflect on how far we, as the Ummah, have come and where we ought to be headed.

So I think it would be useful, this Eid, for us Muslims to imagine what it must be like to live and work in societies where Islam is not the religion of the majority and we don’t have to go far to experience the “otherness”.

In Myanmar, a government-sponsored pogrom was launched in late 2017 against an entire community, the Rohingya, whose only crime was that they were Muslim. Similarly, back in early 2017, the Mindanao city of Marawi was the scene of a destructive siege between the Philippine military and Islamist militants, which decimated what had been a prosperous, if scrappy, urban centre of over 215,000.

With this in mind and also to remind fellow Muslims – especially those who seem to prefer to mark this holy month in fear and recrimination – Team Ceritalah spent some time with Muslims in Myanmar and the Philippines.

We wanted to get a sense of how they managed the fasting month as a minority. Also, given the bloodshed and brutality that had just been waged against their co-religionists, how they felt about the Eid celebrations, and indeed, their future. Family time: During Ramadan, U Tin Win would break his fast with his family and grandchildren. “Sometimes, I would share all the cooked dishes with the neighbours too,” he told Team Ceritalah.

U Tin Win, a distinguished and soft-spoken 73-year-old driver is someone Team Ceritalah has been talking with for the past two years. At the height of the Rohingya crisis that led to the eviction – many have deemed it “ethnic cleansing” of some 741,000 into neighbouring Bangladesh – the old man was preparing for the worst.

Team Ceritalah, however, was surprised that U Tin Win now felt far less worried about the future. Certainly, the arrest last week of Wirathu, the incendiary Burmese Buddhist monk, would have provided some measure of relief – even if it wasn’t connected to the anti-Muslim hate speech that he spouts so regularly.

“There hasn’t been any new problems (in Yangon),” U Tin Win shared. “I think this year’s Aidilfitri will be okay.”

Meanwhile in Metro Manila, 28-year-old Saharah, who is a Maranao Muslim (i.e. from Marawi), is similarly serene. Affable and chatty, she argued that Islam blends seamlessly with Filipino culture.

“Both at my workplace and residence – I feel that there is a close, almost familial relationship within the Muslim community,” she said.

During their interviews, both U Tin Win and Saharah told Team Ceritalah that most of the time, Eid in their neighbourhoods are communal affairs.

Even during the preceding Ramadan, Saharah said, “Breaking fast was more enjoyable at the local mosque as the community could enjoy each other’s company. Each member brings food to share.” Such get-togethers are known as Salu-Salo. U Tin Win was confident that this year’s Aidilfitri would be okay.

Also, as U Tin Win told us, in the Mingalar Taung Nyunt township of Yangon, even during Eid al-Adha (the Feast of the Sacrifice, which this year will take place in August) – both Muslims and non-Muslims come together to celebrate.

This was despite the fact that there have been reports that Muslims in Myanmar have been forced to keep the celebrations low-key, fearing attacks from Buddhist hard-line groups. Nevertheless, as he also said: “We would share all the sacrificed meat with non-Muslims. They would visit my house and eat semai (a local milk pudding)”.

It was moving to hear about how Muslims in these countries are trying to get on with life and even embrace their fellow citizens of different faiths despite the turmoil surrounding them. Their grace under fire should be an example to the global Ummah.

This is not to say that we should become complacent about the tenets of our religion, or ignore the oppression facing Muslims in other countries. But we shouldn’t lose sight of the fact that faith should be about bringing harmony and progress to our societies. Religion should be the cause of unity, not division.

So, this year, as we head home for Eid, or crowd the malls, or feast in each other’s homes, let’s spare a thought for the less fortunate—and be grateful for the peace that our countries enjoy.