POLITICS can be stressful and politicians tend to age fast but Penang Chief Minister Chow Kon Yeow has aged well.

His waistline is thicker but he still has a full head of hair and a glowing complexion.

The stress is set to intensify in the coming months amid speculation of an early general election. 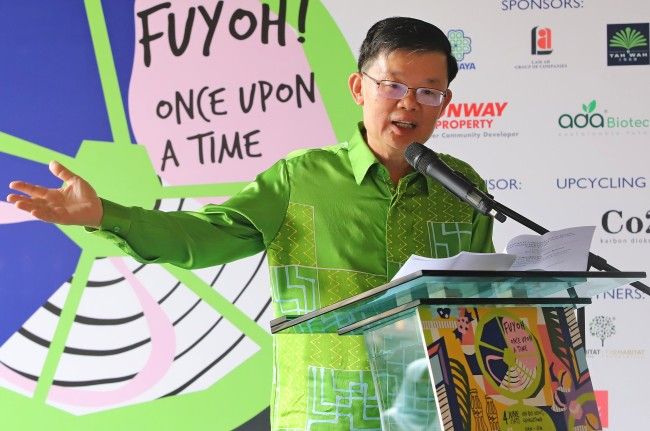 Chow, 63, will need to win the next general election with a strong mandate in order to continue occupying the hot seat on the 28th floor of Komtar in Penang.

His government had previously implied it may not come along in the general election but all the feel-good statements coming from him of late seem to suggest otherwise.

He recently presented the state's report card to much fanfare, with full-page advertisements in the print media and calling on the people to "Love Penang".

It was a glowing report, claiming that 90% of Pakatan Harapan's manifesto had been fulfilled – from the green policy to affordable housing, foreign investments and welfare programmes.

The undersea tunnel, once a centrepiece project, appears to have been swept under the carpet. Chow seems more interested in highlighting policies and projects that people can relate to.

But is it really all sunshine and everything nice in Penang?

The people who live and work in Penang would be in a better position to answer that.

The thing is, Pakatan's hold over the Penang electorate has more to do with perception than dry statistics.

Penang is the only state with a Chinese head of government and this is a non-negotiable factor for the Chinese voters.

Non-Malays feel that they are treated more equally under this government. The fact that this is the only state government with an Indian deputy CM says so much.

Penang's Mr Nice Guy is naturally humble, mild-mannered and approachable. He is not associated with any scandal and gets good press because he treats the media with respect.

Even Penang Malays, who were so hostile towards his predecessor, have nice things to say about him.

Will all this add up to a second term for Chow?

DAP won all the 19 state seats it contested in 2018 while Parti Amanah Negara won two and PKR 14.

While DAP looks set for another clean sweep, its partners are less assured of a repeat performance – going by the outcome of the Johor and Melaka elections.

Things could get problematic for Chow if DAP’s Pakatan partners do not deliver.

DAP politics in Penang is a balancing act between those aligned to Chow and those groomed by his predecessor Lim Guan Eng.

There are undercurrents and a dark horse is waiting in the wings.

Steven Sim, the Bukit Mertajam MP and a former deputy minister, has emerged as a potential chief minister.

Sim is an acolyte of Lim Guan Eng. He was the former chief minister’s shadow in the run-up to the national party election and it came across as a signal that he was someone to watch.

He did remarkably well in the party polls, coming in at No. 7 and pipping his boss Guan Eng who took the No. 8 spot.

He was subsequently made national organising secretary, which is seen as a precursor to the coveted secretary-general post.

Sim, 40, is widely expected to contest a state seat in the general election and anything is possible if he plays it right. For a start, he needs to stop going around with a professional photographer in tow when he helps the needy because it takes the sincerity out of the good act.

When reporters asked Chow about Sim's prospects for the top post, Chow responded with a zinger: "Who knows, Penang may have the first female chief minister."

He was, of course, referring to Senator Lim Hui Ying, the younger sister of Guan Eng.

Was Chow telling one dark horse not to be too presumptuous and that there is another dark horse with bigger cables?

Hui Ying's rapid rise in the party has not gone unnoticed. She is the state party secretary and is arguably the most powerful woman in Penang DAP today.

The kopitiam chatter is that she may contest in Air Putih, the state seat currently held by her brother.

Talk that she may one day become Penang chief minister began when Guan Eng was still running the state government. It started as a joke but the joke seems to have become a possibility.

It would, however, be a mistake to underestimate Chow. The Kuala Lumpur-born Chow planted roots in Penang after graduating from Universiti Sains Malaysia in the 1980s.

He understands Penang politics, has few enemies and came in No. 1 in the last state DAP election, befitting chief minister status.

There have been rumours of rivalry between Chow and Phee, but the two teamed up for the state election and it was a perfect instance of two being better than one.

Phee's network in Penang stretches back to the years when DAP had only one assemblyman in the state, namely him.

Chow will need the support of the old guard like Phee in the coming months to organise and mobilise the ground.

The Chief Minister has produced a beautiful report card, he enjoys public approval and support from warlords.

Now he has to cross the toughest hurdle of all – securing a credible mandate in the general election.

Dark horse in Umno VP race
Beware nature’s displeasure
A long and tough journey
Learn from our neighbour
Spare a thought before reacting
Returning to the way life should be
Predictions time as EPL makes way for game’s oldest cup competition
Of Children, China, and Covid-19
New Year resolution for prevention of ED
Of sackings and suspensions