THIS month’s military coup in Myanmar shook the region.

Malaysia rightfully condemned this return to military dictatorship, but then in a move that was as deeply disturbing as it was hard to comprehend, took up the military junta’s offer to transport 1,200 Myanmarese who were being detained by Malaysian Immigration (the Myanmarese military’s ships have already arrived in Lumut, and are currently scheduled to bring the detainees back tomorrow, on Feb 23).

On the one hand, Malaysia seems to be lecturing Myanmar about democracy, and trying to organise an Asean response against this military coup. On the other, Malaysia seemed so very quick to accept this very strange offer.

When a military seizes control of the government, and immediately thereafter offers to bring back 1,200 of its citizens, any reasonable person should ask: Why?

This military junta is cracking down harder and harder on Myanmarese who are protesting the coup, through the use of more and more violence. Are we to believe that this same junta is so moved out of genuine humanitarian concern that it sent three of its own naval ships to bring back 1,200 of its citizens for benevolent reasons?

Should we expect the military to repatriate these 1,200 Myanmarese, give them a nice welcome home party, and send them on their merry way with a smile and a pat on their back as soon as they reach Myanmar?

Surely we must question the motives of the junta.

If I were a military dictator who had just seized power, I might see this as an opportunity to take revenge on citizens who had fled the country after being critical of the military. I might also somehow try to use the 1,200 people as leverage against their relatives back home.

Some United Nations reports have put the Myanmarese military as having one of the worst human rights records in the world. Is Malaysia truly ready to deliver over a thousand human beings directly into the hands of these wolves, leading them like lambs to the slaughter?

In order to get a picture of how these detainees might be treated upon their arrival home, we need look no further than what is happening in Myanmar as we speak.

On Friday (Feb 19), a 19-year old woman died after being shot in the head with live ammunition on Feb 9. Two other protestors were in critical condition from gunshot wounds.

The military has made widespread arrests, turned off the Internet at various points, and imposed martial law.

We ask ourselves again: What is likely to happen to the 1,200 people once they are handed over to the junta?

Surely we have a moral responsibility not to repatriate people whose lives can be so easily endangered.

I understand that immigration can be a complex issue, and unregulated migration across our borders brings with it legitimate challenges and problems.

It will require the best minds and the involvement of all stakeholders to find formulas that balance between our need for foreign labour, sustainable practices, and human rights.

To date, the issue of the labour market and human trafficking has undoubtedly been fuelled and corrupted by immense levels of greed, leading to the worst types of exploitation imaginable.

While it is not easy to care for 1,200 detainees, I think many Malaysians are willing to bear some additional costs if it means saving these detainees from the violence they are almost certain to face in Myanmar.

Asean has had a long history of struggling to handle cases like Myanmar.

In this most recent episode, if we were to judge by statements and words alone, at least member states are showing the semblance of some backbone.

Statements and words alone, however, do not create change - especially when those uttering those words act in a way that is directly opposite from their stated positions.

Either the military junta is an illegitimate government that must be shunned and not be allowed to usurp the democratic process; or it is a perfectly legitimate, benevolent government to whom neighbouring countries can feel completely at ease handing over human lives.

If Malaysia tries to occupy both these positions at once, the hypocrisy will be plain for the world to see.

NATHANIEL TAN has been to immigration detention centres, and would not wish that experience on anyone. He can be reached at nat@engage.my. 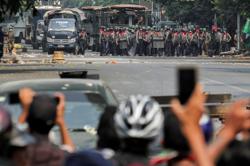