THE third Kuala Lumpur Roundtable organised by the Institute for Democracy and Economic Affairs (Ideas), attended by corporate leaders, founders of small and medium enterprises, economists, bankers, former ministers and policymakers took place earlier this month guided by the question “What are Malaysia’s options for recovery post Covid-19?”

In the opening speech, I highlighted how, for many, the “new normal” has been relatively easy to adjust to, in the sense meetings, meal outings, social gatherings and sporting excursions have been reinstated, albeit with physical distancing, temperature checking and slashed capacities. However, for many others, the realities of the new normal are far more severe.

Friends running small and medium-sized enterprises (SMEs) are convinced that the unemployment is a far bigger problem than is currently apparent, while companies employing foreign talent or customers (such as international schools) are suffering from haphazard (or haphazardly understood) rules about who can cross borders.

Others are voicing additional concern ahead of the moratorium on loan repayments scheduled to end at the end of this month, even with the three-month extension announced by the Prime Minister for those who have lost their jobs. It is rumoured that banks are being persuaded to be lenient on those unable to pay, while the prospect of a further blanket extension has been dangled as a campaigning tactic in the ongoing Sabah election campaign.

As has been oft-repeated by public policy commentators, health specialists, economists and diplomats in recent months, Malaysia has enjoyed relative success in responding to the coronavirus compared to other countries, despite an unprecedented change of political power in February (though an alternative theory posits that perceived political illegitimacy actually made it easier for scientists, rather than politicians, to take the lead). Undoubtedly, combined waves of unemployment and loan defaults resulting in the loss of homes and livelihoods could have a volatile impact on our politics, too.

The ensuing discussion drew from Ideas’ new briefing paper Covid-19 Recovery Strategy: Malaysia as a Regional Manufacturing Hub, in which Lau Zheng Zhou and Natasha Tan encouraged the government to revisit macroeconomic principles and priorities for post-Covid growth and development. This is timely given the current supply-chain relocations to the Asean region, itself spurred by systemic risks within the complex web of global value chains exposed by the Covid-19 pandemic. Malaysia’s already deep integration into existing global and regional supply chain participation means we are in a good position to attract these flows of foreign direct investment (FDI).

In particular, the paper recommends Malaysia becoming a regional manufacturing hub for high-tech sectors to boost long-term industrial development.This in turn will require a nurturing of a sophisticated domestic industrial ecosystem in strategic subsectors, so that relocating multinational corporations will find a ready pool of compatible Malaysian SMEs to work with. In the meantime, the government should continue supporting SMEs in transitioning out of low-value adding activities.

Certainly thus far there has been a wide spectrum in terms of SMEs which have nimbly adapted to new market trends and those which are unable to do so. Clearer policy guidance would go a long way in incentivising SMEs to undertake the investments required for digitalisation and innovation: understandably, at this juncture many are more concerned about near-term survival than future growth opportunities. Going forward, there must also be greater communication on how to access any support available through government initiatives: I have heard many exasperated accounts of how difficult it is to actually access aid that has been announced with great fanfare.

But while direct incentives have their role, in order to achieve sustained growth, all these policies must be complemented by reliable, stable institutions and solid foundations in physical and human cap3ital.

With a variety of other roundtables and conferences also ongoing in recent weeks, it is sometimes jarring to find, in one virtual room, wide agreement about boosting English proficiency to address

precisely that human capital requirement and then, in another social media feed, to see crusaders against English (or other languages) as an affront to their passionately self-believed sense of racial superiority.

While it is tempting to dismiss such parochialism, citizens and potential investors alike need to be mindful of the polarisation that is afflicting many countries, including well-educated democracies, that pits entirely different worldviews, even perceptions of truth, against each other. That, ultimately, risks causing far more damage than Covid-19 already has. 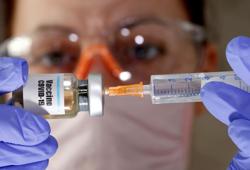 What language for COVID vaccines in the EU? Brussels opts for English