JOHANNESBURG, Dec. 8 (Xinhua) -- South Africa is currently on a stage-six load shedding, with about six hours a day cut off from electricity due to more breakdowns of generating units.

"Stage-six load shedding will continue to be implemented until 05:00 on Friday," the country's power utility Eskom said in a statement on Wednesday.

"We currently have 4,984 MW on planned maintenance, while another 19,052 MW of capacity is unavailable due to breakdowns," the company said.

Pravin Gordhan, Minister of Public Enterprises, on Thursday said he has directed Eskom to address the load shedding as it is affecting the economy and livelihoods.

"Power cuts are having a devastating effect on households and livelihoods, investment and economic climate. This is totally unacceptable," said Gordhan, who added that the frequency of breakdowns was certainly attributable to some element of malfunctioning within the Eskom systems and possibly sabotage as well.

Eskom has also blamed sabotage and theft at their power stations as many people have been arrested including drivers and contractors for stealing oil and sabotaging the power stations.

"We have had to call on law-enforcement agencies to show a stronger presence at all Eskom power stations. We will not tolerate any activities whose purpose is not in the national interest," Gordhan said.

On Thursday, the South African Chamber of Commerce and Industry also called on the government to address the electricity outages since it is affecting economic growth. 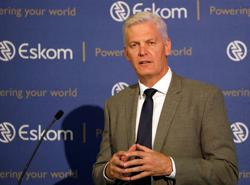